My Big Gap Year: Life Is A Techno-Nazi Cabaret

This week, I'm in the place where both clubbers and Nazis come  to see where it all started: Berlin! Although, I must say there are basically no Nazis left these days and the locals get really red-faced if you try and ask them about it. Nevertheless, this place is teeming with technoheads!

Despite my excitement at coming to such an awesome electro hub, my trip is also tinged with sadness knowing I'll never get the chance to meet the original inventors of techno: Kraftwerk. As I walked from my hostel down to Alexanderplatz, I imagined how proud they'd be if they were still alive. It brings tears to my eyes when I think of them dreaming up the Doctor Who theme tune on an Atari, never knowing that the totally amazing and hot actor, David Tenant, would one day man the Tardis. And when everyone else was listening to conventional guitar music like Paul McCartney and Slade, they were busy ripping it up by creating music using only their minds. They never listened to the establishment who said they were just weirdo communists. We could all learn lessons from Kraftwerk.

And so I was shocked to learn that these beepy giants have been callously forgotten by their countrymen: not one person I asked knew where I could find their graves. However, they did all recommend that I go see a tourist attraction called Checkpoint Charlie. It turned out this was nothing to do with wicked beats, and was actually just a section of Berlin Wall which featured some gruelling photos of the goings-on during World War II. This only added to my sombre mood. I couldn't help wonder why the Berliners wanted tourists to see this stuff. I mean, when I do something I'm a bit embarrassed by, I'll stop at nothing to make sure no one finds out. Like the time my no-taste mate, Carol, dragged me to see Natasha Beddingfield in Birmingham. I dealt with it by getting so drunk I accidentally got my boobs out during 'I Wanna Have Your Babies'. I had to flush her phone down the train toilet to ensure those pics were permanently erased forever.

But the Berliners did no such thing after taking all those photos from Checkpoint Charlie, and maybe this is actually a good thing. Because although they crudely forgot about Kraftwerk as they tossed their broken techno bodies into unmarked graves, they still want people to remember the more random things that they did, and this is a really admirable quality. The unstoppable rise of these efficient, unsentimental people can only be for the good of everyone and that's what makes Berlin the greatest city in the world.

Killer Robots Nothing To Worry About, Say Army Chiefs 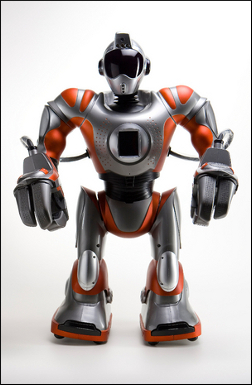 THE army has pledged to keep building massive killer robots with a grudge against humanity, insisting that nothing could possibly go wrong.

Recent projects by the Massive Psychotic Robot Research and Development team include Deathatron, a 500ft metal man with glowing red eyes, circular saws for hands and the brain of an insane genius.

Deathatron is currently chained up in a dank laboratory-cum-dungeon, where he is constantly goaded by callous guards in preparation for his role as an obedient, benevolent guardian of humanity.

Inventor Dr Colin Purves said: "There's absolutely no way that Deathatron won't turn out to be a total boon. Despite his vocabulary being limited to the word 'KILL' he is actually very gentle around children, provided they don't make any fast moves or wear green.

"'As soon as I've finished turning his eyes into twin hate-activated death rays, I shall hand him over to the army where he will be able to help gently coerce civilians in disaster-struck regions into leaving their villages.

"It'll definitely be fine. I'm almost certain about that."

Dr Purves' other creations include 'Killjaw', a massive steel dinosaur with an insatiable appetite for human flesh, and 'Meltdown', a manic-depressive, easily-brainwashed android whose head is an enormous nuclear warhead, both of which recently disappeared following a raid on his lab by terrorist fanatics hellbent on plunging the world into chaos.

He said: "That was quite annoying, but I'm sure they'll turn up. No biggie."