Each week he will visit one of the world's great museums, dismissing any painting where you can't make out their faces, while developing his theory that all the great foreign artists were 'nothing more than communist bum-bandits'.

A BBC spokesman said: "In recent years our fine arts programming has been filled with educated enthusiasts who can only comment on their subject with wit and insight, instead of Jeremy's trademark plebeian sneering and populist bullshit."

Key elements will include a series of races across continental Europe against the art critic Brian Sewell.

The spokesman added: "If Jeremy gets to the Uffizi in Florence before Brian he is allowed to wander round the museum, pointing at every piece of renaissance art and saying 'I could do better than that, seriously I could'.

"He will then make an 'L-shape' with his hand and hold it to his forehead while chanting 'loser' over and over again like some eight year-old boy."

Another regular strand will be the 'Star in a Reasonably-Priced Opera', in which celebrities must perform 'Klange der Heimat' from Die Fledermaus as quickly as possible.

The spokesman said: "The first show will feature Stephen Fry singing the aria in full costume before he and Jeremy sit down and have a right good laugh about all the money they make from the BBC."

Clarkson also plans to restore Michelangelo's 'Last Judgement' fresco for less than £50 using a welding torch, a pick axe and a can of Ronseal woodstain.

Assessing the Jeff Koons Serpentine exhibition, Clarkson said: "If this painting was Ikea furniture, it would be a Poang chair with the matching footstool.

"It has more colour than a supercharged rainbow that's eaten a packet of Opal Fruits and demands your attention like a baby Hitler who's just dropped his Auschwitz."

Harman's Husband Urged To Shag Her 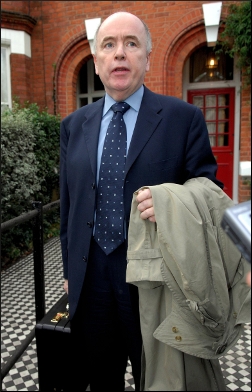 THE husband of Labour's deputy leader Harriet Harman was last night urged to give her a right good seeing to.

As Ms Harman called for all boys under 10 to be forced to wear bras for a year, men and women across Britain pleaded with Jack Dromey to take her to a West End show, fill her full of champagne and then close his eyes and just get on with it.

A cross-party group of backbench MPs has tabled an early day motion calling on Mr Dromey to sexually intercourse his wife for an initial period of 20 minutes and then a further 15 minutes if she still won't shut up.

Conservative MP Stephen Malley said: "The key problem is that as a lifelong trade unionist Mr Dromey probably agrees with her. We are simply asking him to set aside his beliefs, for 35 minutes at the most, so that we can all enjoy the rest of our summer."

Labour backbencher Tom Logan warned: "Harriet and Jack have been married for 27 years, so we can probably assume he has shagged her at least once. Can we really expect him to do it again?

"If he refuses then I suppose we could always ask the Saudi Arabian ambassador if he, or any of his relatives, would like to buy her."

Emma Bradford, a housewife from Stevenage, said: "Last week I told my husband there should be more women in positions of power. He immediately grabbed me by the hand, took me upstairs and demonstrated a series of positions that he felt I was suited to. I then went back downstairs and made a lovely cake."

Bill McKay, an accountant from Peterborough, added: "I could be persuaded but only if I can throw in some laundry as part of the deal. I don't imagine for a second that it would be very pleasant but, you know, mantelpiece, fireplace, poking, etc etc."