Last night I was on Amazon downloading DJ Ricoâ€™s hot new MP3 Zombie in a Comaâ€™ but today I’m in the actual Amazon!

You know, people say that the Amazon is the ‘lungs of the world’ because it is so big there are literally billions of tonnes of air in it, just like in your lungs. But when you’re actually here, it’s so hot and wet that there is actually no air at all. Scammed! Even though the 3D effects are immense, it’s not like Avatar. For a start, the beasties actually hit your face when they fly at you. No wonder Sting and his bendy wife went totally bing-bong and got into all that mad sex. One time, a guy I was with asked me if he could do some tantra on me and I was like, ‘No way â€“ thatâ€™s how my uncle Steve got dysentery!’.

When I was at school, me and my mate, Becca, did our geography project on the rainforest. We had this amazing diagram showing how Sting eats so many beef burgers daily that he produces an area of methane gas the size of 10 football pitches and this is simply hellish for all his tribal friends, who are forced to flee their teepees and get a hotel in the shanty town.  All these facts lead me to conclude the Amazon is more the anus of the world than the lungs – but hey – everyone needs an anus, even Gordon Brown I’m sure.

On the way back from the forest tour, we met some tribal-ish folks living in little huts. They were really nice – totally relaxed around humans. Disappointingly for the Germans on my tour, they weren’t in the nude, but lots of them didn’t have shoes. One sold me a dishtowel made from completely natural ingredients grown by the power of the sun alone. Awesome! This made up for the fact none of them had plates in their lips like Sting’s native buddy. My mate Garry had to get a plate in his skull once, but that was because he roller-bladed down an escalator when he was on coke. I think Sting’s mate’s plate was more for decorative purposes or possibly for getting the advantage in a game of Scatch. Some would say he was cheating but he did go through a lot to get his game up and it wasn’t like he was taking steroids.

I couldnâ€™t find anywhere to get a piercing or plate fitting, but I did find a place which could do me a ‘Brazilian’. Surely, the most gruesome rite of passage an Amazonian can undertake –  so I booked myself in! I can’t wait till next week when I can take my brand new growler off to see big Jesus in Rio. Now I know how nuns feel (and no wonder they sing all the time!). And that’s what makes the Amazon the greatest lungs of the world, in the world. 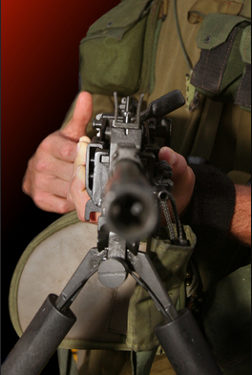 SALES of the British-built L115A3 long-range sniper rifle have risen by almost 250% in a single week, it emerged last night. The record-breaking increase comes after a corporal in the Household Cavalry blew the heads off five Taliban insurgents from the bathroom window of his house in Oxfordshire, almost 4000 miles away.

The corporal, who cannot be identified because he is probably Andy McNab, was at home photo-shopping his face out of his own wedding pictures when he received an SOS call from a platoon who were pinned down and required urgent sniper assistance.

Sources said the corporal made the kills then ran to the other side of the house and won a fairground sharp-shooting competition that was taking place in Houston, Texas.

A spokesman from manufacturers Accuracy International who wished to remain anonymous because he is probably Andy McNab said: “It’s a versatile killing machine that you can a potter around with at home or use as part of CIA black-op that does not exist.”

“I found a website that was doing them half price and he could trade in his RPA Rangemaster .50 at the same time. He hardly ever used that old thing anyway  – the night-scope kept catching on the clip of his dungarees.”

She added: “He’s so happy with the L115A3. Its superior weight-to-range ratio is much better suited to his size and offers unparalleled accuracy and adaptability in a variety of adverse weather conditions. And it came with a Pizza Hut voucher.”

Weekend air-rifle enthusiast Cyril Thompson who is probably Andy NcNab, said: “Before, when I took my little nephews out shooting we were limited to rats, pigeons, maybe the odd Asian. But last Sunday Eric took down two cows that were lined up with a single shot.

“Quite impressive stuff when you consider that one of them was in Colchester and the other was in Tunisia.”