One Woman's Week: Getting My Scapegoat

WHEN I was a younger woman, I flirted with the idea of getting into politics because of my diplomatic skills, impeccably high moral standards and vocabulary consisting of roughly a million words. This is why I cannot fathom how recent events have come to decimate our once so fabulous government. It's at times like these that I wish I had the power to use my skills as a primary school teacher to get things back in line.

Some might say that running a class of P2s can never prepare you for running an entire House of Commons. But those people are basically retarded, as anyone with any sense knows it's exactly the same. When I was forced to watch poor Michael Martin under attack from the media, I was reminded of a time I was victimised in a similar way. It was Arts and Crafts day with my P2s and I was in the middle of explaining the intricacies of Michelangelo's 'David' to the girls in the clay group when there was an almighty ruckus from the boys at the back: Gary Murney (known imbecile) had got a bead stuck up his nose. I took him to the headmistress so he could learn just how serious his foolishness really was. But would you believe it: when I got there, Mrs Dixon sent Gary to the nurse and detained me for almost half an hour to bang on about how disappointing my performance was and how I was looking at a disciplinary for being unable to control my class.

Now, I understand that the problem with MPs isn't that they're putting beads up their noses during Prime Minister's Questions, but if they were, you can guarantee poor Michael Martin would have taken the hit. He never should have been blamed for other people's cock-ups, just like I should never have been punished for Gary Murney's low IQ and disgusting habits. I'm sure Michael could have really benefited from a good tête-à-tête with me, during which I would have counselled him on how I got over the humiliation of that awful day by exacting revenge. You see, the next week the P7s held a charity tuck-shop. I bought a Fair Trade Chocolate Orange with a fiver, the girl gave me change of a tenner and I said nothing. Justice!

If Michael let a few expenses claims slip, it's just because people like him and me know that in this time of recession and mass poverty, entrepreneurial actions like mine are an all too rare event. People like me and Michael should be honoured like Christopher Lee, not hauled up in front of Mrs Dixon and given a lecture about infected sinuses and choking hazards.

I hope the next speaker understands that the House of Commons should start rewarding initiative and stop indulging those no-hoper simpletons who can't keep their fingers out of their various cavities.

Police To Question Long List Of Starlets Over Jewel Theft 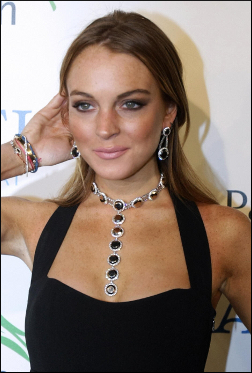 DETECTIVES who questioned Lindsay Lohan over the theft of a £250,000 diamond necklace are to call in Scarlett Johansson and Megan Fox while they're at it.

The Metropolitan Police stressed they could interview anyone they felt like and have drawn up a long, long list that includes Keeley Hawes, Elizabeth Banks, Gemma Atkinson and 'that bird in that music video where they’re all jiggling about doing aerobics'.

A Met spokesman said: "We have to pursue every line of enquiry and sometimes that involves strip-searching dozens of nubile young actresses and asking them if they think we're good-looking."

The jewels were targeted by thieves after it was discovered they had been draped across Lohan's naked breasts during a photoshoot.

Jeweller Emma Bradford said: "The price of diamonds remains fairly static. Anyone who can dig a big enough hole in Africa and has a negotiable stance on human rights can get their hands on some.

"But quality gems that have felt the touch of a sexy redheaded bisexual actress of variable morals will double in value."

Lohan was questioned for 72 hours by the newly-formed Seriously Fit Squad and made to appear in a series of police line-ups dressed as a French maid, a nun and, at the request of Commissioner Sir Paul Stephenson, a Bavarian sheepherder.

Police sources said the raids on London jewellers, previously thought to be the work of a highly-organised crew of criminals on mopeds, may have been carried out by a coalition of Girls Aloud and the Pussycat Dolls, except for the one that looks a bit tranny.