One Woman's Week: She's Not Keeping Someone Else's Baby

I think that in this day and age, when a woman as exemplary as Madonna wants to adopt an impoverished child, we should just be damned grateful. The Malawian government obviously don’t share my opinions and evidently can’t run a country. As a woman who just can’t sit idly by, I took matters into my own hands.

I have been keenly following Madonna’s African adventure with my class of P2s. They love hearing about the time Madonna wrestled a baboon with her bare hands and almost got disembowelled by a pack of savages during one of her jungle expeditions (okay, these things may have been exaggerated a little, but it is never a bad thing to fuel the imaginations of today’s youngsters, who would otherwise be wasting their time reading Harry Potter and getting ‘anorexia’).

We were shocked at the Malawians’ decision to prevent Mercy from being brought up by Madonna and all her exciting showbiz friends. Mercy and David Banda could have been the next Barack and Michelle, but instead David will be lonely forever and Mercy will be just another Whitney – screaming at the cars and living in a skip.

Then I had an excellent idea: we’d put on a special class play at assembly to highlight Madonna’s struggle and the implications for race relations at our school. It would be called Banda-Aid.

We spent all week rehearsing and I’m proud to say my P2s really excelled themselves on the day. Amelie Wilkes (my top singer/dancer) played Madonna – who gets waterboarded by the natives because she wants to save all the orphans. Eventually, a mysterious woman in a veil emerges and guides her and the children to safety. The woman says she escaped from an Islamic fundamentalist camp, where they were trying to marry her to her own cousin (we all mime being sick). Only at the end, she tears off her veil to reveal she is in fact Lady Obama (played by fake-baked Holly McDonald) who has come to Africa to improve race relations.

A tear came to my eye as she delivered her final speech: “See! I am an ethnic woman and I don’t go covering up my pretty face with a veil! No wonder I married the president! Let’s all go and live with Madonna in America!” Then, we go into a rollicking finale with a class rendition of 'Holiday'.

I almost forgot that we live in a world where stupid laws can rip children from Madonna’s wiry arms. All she wanted was a sister for David Banda, and she was even prepared to accept a three year old to match up the ages (which let’s face it, isn’t as good as getting a brand new one – you just don’t know where they've been at that age). It’s at times like these that I wish life really could mimic art. 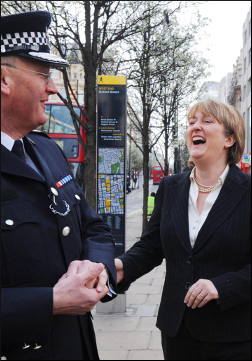 HOME secretary Jacqui Smith has pledged to crack down on council spies to prevent them from catching her doing something appalling.

Ms Smith said councils should only use covert surveillance in serious cases, which did not include poking about in people's bins, looking for their cable TV bill.

The Regulation of Investigatory Powers Act (RIPA) allows public authorities to intercept electronic data and film suspected criminals, but some councils have used it to crackdown on careless sneezing and people posting letters incorrectly.

In one case a local authority devoted 120,000 man hours and more than half its budget to gathering footage of as many different animals as possible going to the toilet.

Announcing the review, Ms Smith said: "These powers are supposed to be used to combat terrorism and hound smokers to death, not to film me putting my bins out early or framing a Tory MP.

"Responsible citizens need to know they can put their shredded expenses claims in the bin whenever they want without being treated like some corrupt, grasping, second-rate politician with no control over her department.