One Woman’s Week: Too Many Pricks

ANOTHER  Mother’s Day passes and once again we all take a moment to remember that special woman who sums up the entire event: Jade Goody. But can I be the only one who absolutely insists we look more closely at the legacy she has bequeathed us?

No one would have believed that someone raised single-handedly (if you’ll pardon the pun) by a soap dodger would one day become a woman who wrote several pieces of literature. It is wonderful that our society offers a ladder to such wretches, allowing them to climb out of the gutter and up to the attic conversion of glamour and success.

But as we all know, ladders mean only one thing – snakes.  And for me, the biggest snake now hissing at us from beyond the grave is the cervical cancer vaccination campaign, famously inspired by La Goody. Don't get me wrong: I think it's just super that we now offer vaccinations against it, and there's no doubt it will save the lives of thousands of women.

But what kind of women will they be?

Everyone knows what sort of behaviour leads to afflictions of the 'vaginal' area. What we've done is given the green light to battalions of already orange school girls to go out and repeatedly copulate with train conductors and weathermen. And nobody needs to see that.

The annoying thing is, girls like Jade always seem to get their way even though they use phrases like 'ain't never' and 'I've went'. Watching Celebrity Big Brother, I found myself identifying completely with Shilpa, even though I'm almost certainly not a Pakistani. Jade's poor diction was so redolent of my own school bully, Kelly-Jane Berry who made my life hell by saying my bag was from C&A, which in today's lexicon is the equivalent of calling someone a lesbian.

Like Jade, Kelly-Jane left school and  became a sad and lonely non entity with nothing to do but get consistently pregnant. It seems the vaccinators, in their sick enthusiasm are determined to push today's young ladies into the same public house lavatory where Kelly-Jane conceived so many of her screeching tykes.

And so the woman who might one day have been your estate agent or acupuncturist will instead be scratching at her undercarriage in a working men's club and passing completely unsubstantiated judgement on where you bought your bag. Thank you Jade.

How wonderful that David Cameron has thrown his wife onto the oratorical bandwagon currently careering around Westminster. He trusted her to be able to speak in front of an audience, and speak she did! In a world where France boasts the exquisite first lady, Carla Bruni and the exotic temptress, Michelle Obama currently slinks along the corridors of the Whitehouse, Britain could one day boast Sam Cam, the wordy Tory babe. Her proud expensively-educated breasts and big, horsey face are sure to inspire this summer’s look and I'm sure I won't be the only one sporting 'high birth chic' in my local All Bar One.

What a shame Kate Winslet's marriage has hit the rocks. I must admit that when I tore my hamstring last summer I gained several pounds and for a moment it seemed my relationship might go the same way. What a relief I was back on my feet by August and my beloved and I are still going strong. Sadly, Kate's obesity is in her genes so I suspect she'll be spending August, and probably the rest of her life, on her own. 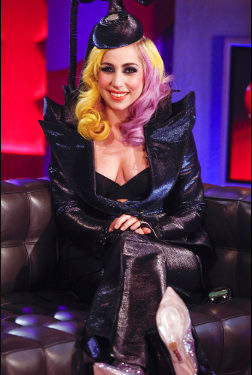 The telephone hat does actually help a little bit

In recent weeks, the American singer-attention seeker's ubiquitous breasts and buttocks have been causing increasing tension among British men, many of whom are struggling to understand why they do not find them even remotely arousing.

Man Tom Logan said: "They are perfectly good, female human breasts and buttocks. Normally that combo alone, even if grafted onto a toad's back, would be sufficient to heat my juice.

"Plus in her new video she wanks a marmoset while dressed as a kind of fetish combine harvester, or something.

"And yet… and yet, try as I might, I simply cannot muster any sexual enthusiasm for La Gaga. It's weird, it's not like I'm sophisticated enough to be deterred by her intensely irritating personality or the fact that she has the aspect of a young Pauline Fowler."

He added: "There's just something about her that's subtly revolting, like Ginster's Buffet Bars."

Teacher Norman Steele said: "I'm a bit of a pervert and also a keen amateur oceanologist, so Gaga – a dirty girl who frequently dresses like a crustacean – should be right up my staircase.

"Yet somehow I can't even crack a semi over her, it's most perplexing. Am I on the turn?"

Dr Nikki Hollis, of the Institute for Studies, said: "My guess is it's probably because she looks like the personification of some weird STD from the 23rd century.

"Plus she's got that Peaches Geldof thing where her face looks like it's been painted onto a deflating balloon."