THE government’s latest immigration rule prevents foreigners from working in our British takeaways.

While I can see Mr Cameron is only trying to protect me, I must voice my concern about the long term effect on my fabulous, colourful neighbourhood.

I regularly donate to my local takeaway establishment, Fancy Dish. This is despite the fact I struggle to communicate with Mrs Lim and she frequently becomes angry with me. But those unintelligible doodles she jots down must more or less translate to what I had in mind as I am always rewarded with my chosen ‘fancy dish’. It’s an exchange as old as the hills – I think of Mrs Lim as I think of my Scrabble opponents: if you use lots of big words, you’ll generally win the game. And sometimes you can even make up words.

Under the new rules, Mrs Lim would be shown the hairy side of Mr Cameron’s hand as she is obviously borderline retarded. But university educated foreign types can still immigrate. Why?

The new doctor at my grandfather’s nursing home is a black gentleman (I’m guessing African?) and he touched my grandfather somewhere that’s very special to him. Of course, I’m not saying old men shouldn’t be touched like that, in fact I hear it is to be encouraged. But my grandfather has never met a real black person and got so flummoxed by the whole ordeal that he thought it was Stevie Wonder, of whom he is very fond.

We tried to sedate him with seven and a half hours of Midsomer Murders, but he was still pretty rattled.  Fortunately, I was quick-witted enough to remember that blind people are very often drafted in to tune pianos and, in the end, grandfather was reassured that Dr Tembo was probably rather deft and that everything was still intact.

I’m not saying stop them from coming. On the contrary, I’m saying ‘Let them come in droves – but to cook their wonderful ethnic foods, please!’ There are just some things we regular Brits can’t do – I’ll admit, my curry is rank!

And where in Africa does Dr Tembo get the specialist knowledge to fondle my grandfather in this most expert of ways? Grandfather never comes out for morning tea anymore and prefers to burrow away, gorging himself on Thornton’s Continentals and listening to Superstition on repeat. It’s not a life.

I’m a socialist, like Fearne Cotton, and we’re fighting for the ordinary man on the streets of China or Africa. Let’s not allow some meaningless university certificate affect their right to our food jobs.

It’s always exciting to see Brangelina showcasing their vast, multi-coloured brood, just like any ordinary family. Of course they have to deal with the paps, but I noted on their most recent trip, they’d dressed all their biological kids in beige and all the non-bios in the rest of the rainbow, just to make it even easier for us to distinguish them. Lovely idea, but remember: laundry is rarely that straightforward. 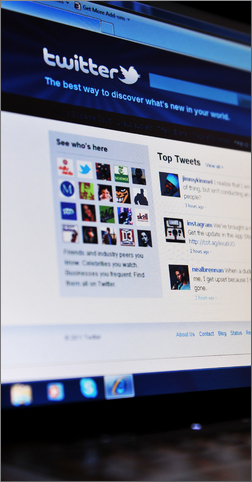 In the time it took The Beatles to revolutionise popular music twice, Twitter has gone from not existing to aggregating over a billion gobshite haikus a week.

Technology gurus said Twitter had matured from being Stephen Fry’s bloodthirsty mob organiser to being the most efficient way to read what Simon Pegg has to say about his latest piece-of-shit film.

Meanwhile the site’s founders were celebrating a stock valuation of £213bn and claimed that over the next year the company’s revenues will double to just under eight pence.

Julian Cook, investment analyst at Donnelly-McPartlin said: “We are advising all our clients to buy Twitter. It’s definitely not a fad. Why would anyone suddenly get bored of this?”

Experts also stressed that Twitter had credited itself with organising popular uprisings and toppling dictatorships.

Professor Wayne Hayes, from Reading University’s faculty of social networking websites, said: “Spiraling food prices and years of oppression played a small role, but it was because of Twitter that people knew exactly where they were supposed to stand while shouting ‘death to Mubarak’.”

He added: “If only they’d had Twitter in Imperial Russia they wouldn’t have had to put up with another 70 years of Czar Nicholas II.

“Meanwhile communism – which didn’t actually happen because there was no Twitter – would not have been toppled and the Berlin Wall, which didn’t exist, would still be there mainly because no one knew about it as they hadn’t seen it on Twitpic.”