THIS week I’m in cactusy slot machine capital: Vegas! Some people come here to meet hot dames at the roulette table; others to get out of their tiny minds on daiquiris and poppers before getting hitched at 5am in the glamorous Britney style.  But not me: I’m here to do some serious CSI investigations and bag myself a felon.

Science is dull – especially when you’re as sexy as Marge Helgenberger from the LVPD crime lab. So it’s no wonder they ditch those Petri dishes in favour of driving round the suspect’s house and popping some caps into him. At my student union Halloween disco, I spent weeks designing my teletubby prostitute costume and was totally set to win the best dressed prize when a bunch of pharmacology students turned up dressed as E coli and snatched first place from right under my jaws. One word: WTF?! It was without doubt the most unfair thing that’s ever happened but that’s what it’s like for the Vegas cops every day.

Anyway, my hotel is right on the Strip so I wasn’t surprised when I found traces of GSR in my toilet. I was able to guesstimate the TOD to be 4am. There was no use looking for the VIC – he’d be six metres under the Nevada desert by now, his dental records vanished without a trace. Further investigations under the bed revealed a Riverdance DVD and a Scholl Party Foot. Upon closer inspection I found a pube on the Party Foot. I added the pube to my zip lock bag and wondered what kind of maniac had done this. ‘Caucasian, mid thirties, Irish, lots of pubes, happy feet’, I reasoned. Down the corridor, I found a pair of shiny, black tap shoes outside a room. I put on my shades, sprayed the shoes with Mr Muscle and when they didn’t turn purple I knew I had conclusive proof. I waited for the owner to leave his room before I accosted him. He was dressed as a tiny Elvis: Smart – a disguise. ‘Mr Presley!’ I shouted. He turned round, startled and jabbered some nonsense. Japanese! Damn, this guy was good. He didn’t fit my profile but sometimes, being a CSI is all about being completely wrong. I rugby tackled him to the ground but didn’t anticipate he was armed: he stabbed me with his wand and then took off screaming down the hall. I gave chase but it took valuable seconds to get that thing out of my buttock and I lost him.

Yes, some people come to Vegas to get married by Elvis. But I came here and got stabbed in the arse by Elvis. Can’t believe I let that crazy Irish/Japanese perpetrator get away but at least he knows his days are numbered and soon it will be me who’s doing the stabbing. And that’s what makes Las Vegas so much better than than Special Victims Unit. 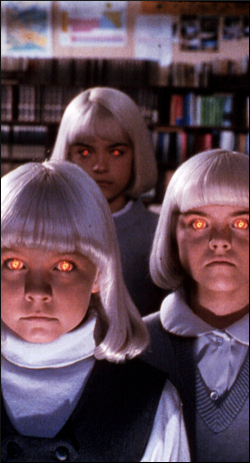 THE new series of The Apprentice is inspiring a new generation to become grasping, money-obsessed little turds, the BBC has claimed.

As another clutch of hopefuls clamour to become Sir Alan Sugar’s desktop stress relief bitch, the corporation said it was proud to help create a new wave of budding arseholes.

Kyle Stephenson, 13, from Peterborough, said: “Sir Alan was just a working-class boy like me, but he’s worked hard to have a magnificent house full of smoked glass and velour.

“I’m already using expressions like ‘taking the helicopter view’ and ‘actioning’ and am developing my own bullshit personal history involving an infeasibly successful career in recruitment during which I made infinity pounds in my first six months.”

A BBC spokesman said: “The Apprentice is about inspiring Kyle and thousands of other cold, alien little bastards. They’re like the children in Village of the Damned but with better hair products and it’s our job, as a public service broadcaster, to help them fulfil their amazing potential.

“Hopefully one day one of them will mastermind a horrifyingly cynical marketing campaign that will trick you into a buying some piece of shit you could never possibly need.”

Sir Alan, known to millions as a dog testicle balanced atop a Marks and Spencer’s suit, made his fortune in the early Eighties selling computers to parents who didn’t love their children enough to get them a Commodore 64.

Meanwhile the BBC has been forced onto the defensive amid suspicions one of the contestants may previously have been a person.

A BBC spokesman said: “It’s inevitable someone with a stray thread of humanity occasionally slips through into the bunged-up toilet full of greasy spivs and hyena-eyed women who compare themselves to sports cars.

“Rest assured we will find out who it is and have them strangled by a bear.”