I’VE been receiving a lot of emails recently from fans asking what my Christmas day is going to be like. The truth is, it’s going to be in the top seven percent of Christmases globally.

High quality gifts will be exchanged in a touching manner and an atmosphere of extreme success. Price tags will be tastefully removed, but the select coterie of world-class golfers and international CEOs in attendance will know they are opening a gift with a minimum resale value of Â£10,000.

After presents and expensive food, we’ll sit round and play traditional success games like guessing who owns the most square yardage of Croatia. However, it wasn’t always like this. My Christmases used to be measly affairs. I’d sit round a flimsy table with some no hoper of a relative, trying to lift the mood with a futile game of Hungry Hippos, while we waited for whatever factory farmed animal was being roasted in the medium-sized kitchen. All we had was each other. It was simply not good enough.

I, like you, longed for a wealthy and sucessful Christmas. Then one day I met a highly esteemed man of science who told me if I wanted lots of money I needed to start banking with the Universe. I said: “The Universe? You mean the one that’s in outer space?” He replies: “Yes, there’s loads of coins and notes floating around in it. It’s a bit like the Crystal Dome in that show The Crystal Maze but without the excitable bald man.” I immediately asked: “Please tell me how to get the money in space?”

The richest, cleverest people throughout history have all known about Universe Banking. Naturally they haven’t told you or most of the people in Africa, because they don’t want everyone getting in there and taking what could be their’s. Poor people think they need money, rich people think they have money and the universe always delivers what you think. Yes.

According to quantum physics, when you think of money in your head you create a thought that then wobbles off into the Universe. It’s like throwing a really bouncy ball into a squash court. Now imagine that rubber ball is me at an exclusive nightclub. As I confidently move my body in partnership with the beat on the dance floor I’ll pick up the admiration of men and the phone numbers of women. This is what’s happening to that wobbly rubber mind ball when you ding it out of your brain. Instead of picking up respect and breathtaking females, the ball is picking up money.

Before I knew it I had tripled my salary and was using the cosmos like a giant cash machine. My only remaining problem was how to spend it all? Eventually I settled on getting everything Colin Montgomery has got, but of a slightly higher quality.

So my gift to you this year is an application form to join the Bank of the Universe. And may I wish you all a very Dr Morris O’Connor Christmas.

No work done since last Tuesday 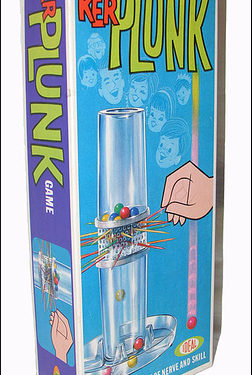 Bankers are allowed to bring in Kerplunk

Despite employees being obliged to keep turning up until pretty much the end of the week, nothing much at all has been done across the entire spectrum of British industry since about 11.25 am on the 14th of December.

Office unit, Martin Bishop, said: “It’s a bit like non-uniform day at school, except it lasts for about a fortnight and you probably shouldn’t bring Mousetrap in. You still have to arrive every morning, but really you’re just flesh on a chair.

“Pick up the phone a couple of times a day while making a serious face and you won’t get any bother.

Employment expert, Emma Bradford, said: “It’s not strictly true to say that the entire UK pretty much gave up doing anything a fortnight ago. There’s still some people working hard, who can be categorised mainly as ‘hospital workers’, ‘shop staff’ and ‘twats’.”

Tube driver Roy Hobbs added: “In my line of work, you can’t really slack off over the festive season, what with all the Christmas shoppers making the train slightly heavier.

“And while, as we all know, a child could do this job with their eyes shut, it’s times like this when I could really do with a hot bath and a nice relaxing strike based on absolutely nothing.”