A day in the life of Jacob Rees-Mogg, Crusader for Truth

MY liege, and England’s Lord, Boris Johnson is besieged by moral and intellectual pygmies. I must don my ancestral armour and joust for his honour. Follow me!

An early start on Radio 4’s Today, a seditious nest of Marxists and sexual deviants, where I am impertinently questioned about Boris’s fitness for office. I explain that laws have always been subservient to breeding in our sceptered isle and suggest Justin Webb be exiled to Van Diemen’s Land. He cowers pleasingly.

I join Nick Ferrari on LBC Radio, a peasant who knows his place. He agrees that the concerns of millions of British subjects are mere fluff and will blow away on the strong winds of warfare gusting from the duplicitous East. I thank him for his work, as one would thank a hound that stands on its hind legs, and tip him a crown.

I arrive at Pebble Mill At One to learn that the programme in question no longer airs and instead I must appear on a dog-and-pony show called Politics Live. I elucidate once again that the matter is over, the line drawn, the past the past. An impertinent man who ‘lost a relative’ challenges me afore I backhand him with a leather glove.

A special committee of the Commons requires my presence, and I magnanimously attend even though members of the Opposition must be present. Not troubling to learn what it concerns, I declare that Britain desires only a strong Navy, the restoration of rotten boroughs and regular slaughters of the Scots to flourish as a nation. Then take my leave.

I am called upon to appear on an evening news programme despite my well-publicised belief that TV broadcasts should end at 4pm to clear evenings for second jobs. I once again hear the prime minister’s good name besmirched by fools, and draw my rapier to emphasise my point. When will they learn that it is simply not their place?

BBC Question Time, where I am the only guest to arrive on a thoroughbred steed carrying a halberd as tradition dictates. Questions relating to Lord Johnson’s probity are swiftly and finally answered by my crossbowmen, leaving 18 dead. Emily Thornberry is dispatched with the blade and Fiona Bruce must duel me on Sunday or lose all honour. For Boris, and St George. 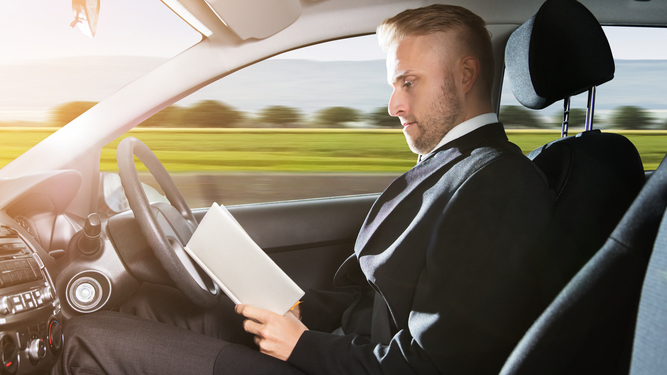 UNDER the new Highway Code, motorists will be allowed to watch TV while self-driving cars fight crime, it has emerged.

According to proposed updates to the Highway Code, drivers will be free to watch built-in TVs while their self-driving cars bust arms dealers smuggling nuclear weapons and defend ranchers from wealthy landowners.

Motorist Tom Booker said: “Usually I have to keep my eyes on the road when I’m infiltrating a gang of gunrunners or springing wrongly imprisoned convicts from jail, so I can’t wait for this to come into force.

“Under the new rules I’ll finally be able to catch up on series two of Bridgerton while my car tracks down a doomsday device. I just hope I’ll be able to pick up Apple TV so I can watch Severance. I hear it’s really good.

“And by plugging in my headphones I’ll be able to drown out my car’s annoying backchat as we swerve around our weekly set-piece chases. It’s nowhere near as witty as it thinks it is.”

Speeding through the doors of a top secret military bunker, he added: “It doesn’t make sense that using mobile phones while driving is still illegal though, but I’ll get over it.”