Boris and Carrie's guide to having a quiet night in

WITH Boris Johnson and Carrie Symonds now properly moved in to Downing Street, the couple reveal how they spend charming Tory evenings together.

Definitely not having blazing rows

Boris: Every moment Carrie and I spend together is wonderfully calm and tranquil, often consisting of just gazing lovingly into each other’s eyes for hours on end. And I wouldn’t say that unless it was true.

Carrie: Yes. Our recent screaming altercation was actually a rehearsal for our am dram group’s production of a play called The Shouty People.

Boris: Downing Street is perfect for wizard japes – sliding down hallways in your socks, jumping on the beds, hiding in the attic. It takes me right back to Eton, not that I ever left. And you should see the cabinet room – I’ve turned it into a ‘boys only’ den with the secret password ‘Winston’.

Carrie: Yes, it really doesn’t p*ss me off being a professional woman and having to slide down the stairs on a tray every night.

Boris: With my clownish image and Carrie being a modern young woman it’s easy to forget we’re still horrible Tories. Last night we had a lovely chat about how to cut taxes for our chums and reintroduce the idea of poorhouses in a palatable way.

Carrie: Oiky types without jobs could live in a big sort of factory and make tea towels with the Queen on. You could visit them in one of those jolly hi-vis vests and a helmet. It’s a great PR opportunity.

Boris: What could be more romantic than a candlelit dinner, possibly with Dominic Cummings present, a good Winston Churchill documentary, then off to bed for a spot of rumpo?

The middle class guide to ruining a picnic 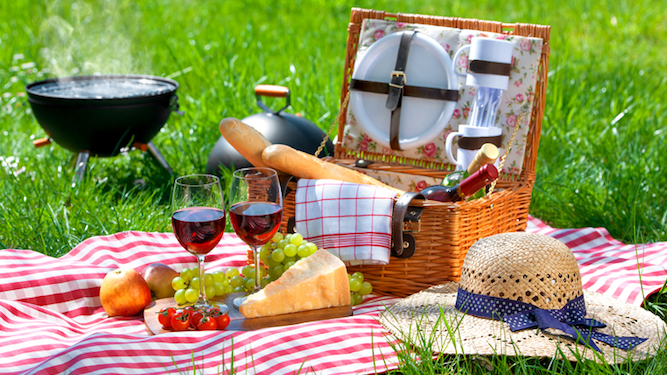 A PICNIC is the perfect meal: finger food with booze and hardly any washing up. But thankfully middle class people have found ways to complicate it. Here’s how to ruin your next one.

Spend an hour dicking around with a gazebo

Common sense would suggest a picnic is about food, but some middle class people first like to make it about erecting a tent without walls. Makes you feel as if you’re at a sh*t corporate event while failing to keep out flies who fancy a second course after some delicious dog poo.

Along with the big Waitrose shop, transporting picnic equipment is why so many middle class people have oversized 4x4s. Take more furniture than most people have in their flats, and if you must sit on a rug, make sure it has a label saying it was handwoven so the world knows you support artisans.

Ostensibly to protect your head, but mainly to project an image of… er… something. Looking like an escaped Nazi in South America?

The hamper or hampers should be incredibly cumbersome with loads of fiddly straps inside. Ideally you should look as if you’re carrying a giant wicker briefcase – which makes sense because this picnic will feel like hard work.

Although too ashamed to eat in front of the telly, middle class people will gladly scrape out the bottom of a houmous pot while watching a play they’re pretending to understand. Take some blankets for freezing late-night temperatures, and your phone so you have something to do while the actors are talking.