Britain facing long hard winter of it not being Brexit's fault

THE UK is facing a long, harrowing winter of high bills, stock shortages and none of it being anything to do with Brexit.

Suppliers have warned that everyday items will be unavailable, energy bills will rocket, inflation will run rampant and there will be a constant, thought-scrambling stream of messages on all media that Brexit is entirely uninvolved.

A government spokesman said: “There are tough times ahead for anyone unhelpfully interested in linking cause to effect. Very tough times indeed.

“The unprecedented circumstances of Brexit being a great success and anything negative being completely unrelated means the next six months are crucial in keeping the two separate in Britain’s consciousness.

“To that end we have released £330 million in emergency funding for a cross-platform marketing campaign, backed by slavishly supportive media coverage from all the usual pricks and the BBC, if it knows what’s good for it.

“And this also applies to the blameless architects of Brexit. Johnson, Gove, Rees-Mogg, Farage are all great men. The state Britain finds itself in is nothing to do with them. In fact they’re appalled.”

Donna Sheridan, aged 35, said: “I agree. The two phenomena of Brexit and everything going to shit are unconnected in any way. I voted Leave.”

Chinos, and other ways to show you're a twat that are cheaper than buying a Tesla 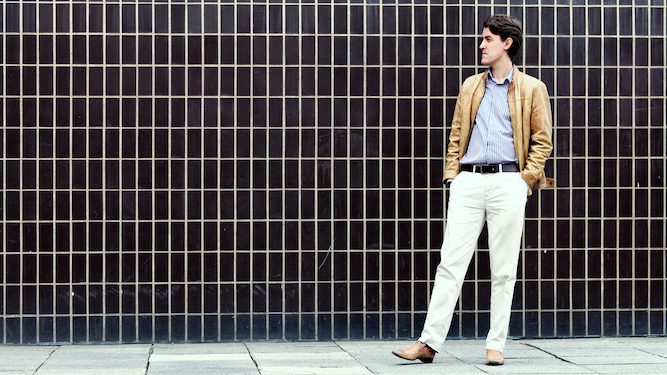 TESLAS are ludicrously expensive, so why not try a more cost-effective way to highlight how much of a twat you are?

A fun way to alienate all around you is by becoming a massive ponce about whisky. Learning the difference between single malts and blends is a great way for twats to combine two of their favourite hobbies: getting pissed, and pedantically lecturing people about a dull subject.

There is no more efficient way of letting the world know you’re a full-time prick than by picking yourself up some red chinos. Get yourself that ‘gammon at a yacht club’ vibe to really indicate to people that you are fundamentally awful to be around.

If you are looking to find out the time, you could either check your phone or purchase the cheapest watch available, which will be roughly £10. If you would like to indicate that you are an annoying as f**k person with more money than sense, spend several thousands of pounds on buying a jewel-encrusted clock to strap to your wrist.

Golf clubs serve an incredibly important social function. They exert a gravity which draws in all pricks in a given area, allowing everyone else some brief respite while tedious arseholes pummel a small ball around a field. Saying you’re a member of a golf club is a great way to let people know they should avoid you.

Be a bellend in a Nissan Leaf

If you’re really committed to the idea of buying an electric car, why not simply be an arsehole in a Nissan Leaf? You’ll save yourself £20,000, and you can just drive it like an idiot. You could even use some of the money left over to have ‘Driven by a massive twat’ written on the side.