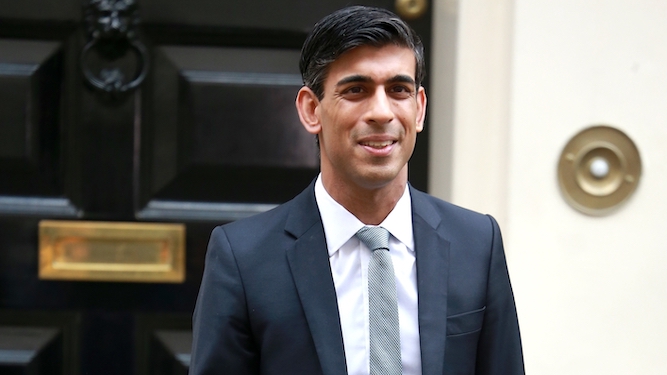 WORRIED about surviving the UK’s escalating economic apocalypse? Fear not because chancellor Rishi Sunak is here with advice for the hard times ahead.

We’ve all been there – the pennies in your piggy bank don’t stretch to a loaf of Asda own-brand bread. But instead of any meaningful public sector pay rises, we’re offering reduced-price metal detectors – via our preferred government partner – so families can get out there and find the pennies that Britons threw away in the days of plenty.

Motorways in Kent might be at a standstill once the Brexit transition period ends in January. So why not go and join the queues of lorries and ask if you can take their rotting food off their hands before it goes to waste?

In the rough and tumble of life, we all have to do difficult things to make sure we’re on the winning side. So don’t be afraid to visit an elderly relative and have a quick look through the drawers in their bedroom, just to be sure they’re not keeping any cash that they probably don’t need.

Bet against the pound

We’re all patriots, of course we are. But that doesn’t mean we shouldn’t put our own interests first from time to time. That’s why we think that you should be pragmatic and consider some of the excellent opportunities out there to invest in the decline of the pound.

Your drinkalong review of 2020 with Daily Mash beer THERE has never been a year more suitably paired with alcohol than this one, so the Daily Mash has joined forces with artisan beer wizards Northern Monk to produce our own pale ale.

Get a few cans in and follow the events of the year with our drinking game:

Donald Trump was justly yet pointlessly impeached, Harry and Meghan announced they were stepping back from Royal duties, and the UK left the EU. Drink for every time you said ‘Well, this is a low point. Hopefully this year’s uphill from here.’

While the nation stayed home and did Zoom quizzes, Dominic Cummings told us all that he was a good father, a key driver of Northumberland tourism and a keen amateur optician. Drink for every lockdown regulation you subsequently ignored.

Britain and the world cautiously reopen, allowing friends and family to see each other and the inside of a pub. Teenagers everywhere get completely made-up GCSEs and A-levels. Drink for every government U-turn.

Kids go to school for the first time since bloody March. The government celebrates by deciding to break international law, which is no problem because Trump’s into it and he’s going nowhere. Drink for every mole Johnson ineffectively whacks with a regional lockdown.

Back in lockdown, the UK is rocked by Trump’s election loss, the discovery of not one but three vaccines, and an unsettling sense of fear caused by good things happening. Drink for every 1,000 lorries queuing along the M20.