POPULAR cartoon character Daddy Pig has arrived at work to give an important speech rambling and obviously drunk.

The character, who has always been boastful and convinced of his own brilliance despite copious evidence to the contrary, shocked the Royal Institute of Animal Architects with a bizarre, incoherent speech which appeared to be the result of intoxication.

An attendee said: “He staggered to the podium and started going on about a recent visit to Potato City, which he appeared to think would be of relevance to a group of serious businessmen even though it’s a theme park for children.

“Then he made a joke about ‘buyer’s remorse’ related to his recent marriage to Madame Gazelle, which everyone thought was in bad taste given he’s left Mummy Pig with both kids.

“Then he was silent for two minutes and seemed to have dozed off, then went off on a tangent about his days as champion puddle-jumper, then said ‘Who needs f**king business anyway? Miss Rabbit does every f**king job.’

“Then he urinated on the podium, staggered away to his red car, jumped in, drove it down one hill and up another and into a wall.

“After which he said he’d got over the points he wanted to make and it went over well, and the entire audience fell down on one side laughing uncontrollably.”

Five cheeky ways to put the brakes on your sex life 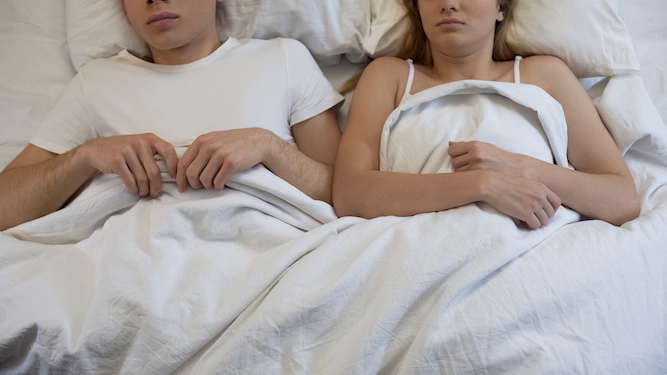 IN A new relationship and under the illusion the sex will always be this good? Here are five fun ways to kill the mood:

Put the lights on

If you want to slam the sex train against the buffers, insist on keeping the lights on. And not gentle mood lighting either: the big light. If that doesn’t make losing yourself difficult enough, try positioning a prominent mirror so you can be repulsed by your own dodgy facial expressions and pudginess as well as your partner’s.

Cut back on grooming

Start skipping the odd toenail trim here and the odd muff wax there, and you’ll be repulsing each other before you can say ‘seriously when did you last shower?’ Soon even the thought of a bit of light oral will bring on the retching.

Trying new things is the ultimate mood-killer. You thought mustering up the energy for missionary was tough on a Monday night? Try experimenting with an innovative new position that’s only pleasurable for the wildly athletic. Before you know it, you’ll be making excuses like a middle-aged married couple in a 80s sitcom.

There’s nothing like taking a leap of honesty to f**k up your love life. Wanting to be accepted for who you are is a great way to ensure you won’t be, so go ahead and share all your deepest fantasies and see how quickly your partner suggests a bloating takeaway and an old episode of Grand Designs.

Viking costumes, dodgy accents, stomach-churning awkwardness… be sure to go the whole hog and watch all signs of attraction drain from your partner’s face. Soon enough, you just won’t be able to keep your hands on each other.