DAILY Express readers have blamed political correctness gone mad for not being allowed to burn Remainers alive in a wicker man on Brexit Eve.

Readers of the alternate-reality newspaper cannot believe they are being denied such a simple, harmless pleasure, tonight of all nights.

Leave voter Roy Hobbs said: “I’ve been telling all the Remoaners I know to come and be burned in the large wicker man we’ve built, but they’re not having it.

“Not content with delaying Brexit for years when we should have had it the day after, these selfish whiners are refusing to climb the ladder and nestle in beside the petrol-soaked kindling.

“Apparently it’s ‘against the law’ and ‘murder’. Well yes, before 11pm that’s true, but after that Brexit is the only law. I wouldn’t light it until then. I’m a stickler for rules.

“We’ve got Morris dancers in to lead a procession gaily around it, a brass band and a live PA from Louise Redknapp, but as usual these sulky, inconsiderate children are ruining everyone’s fun.

“The fire would keep us warm as the ‘snowpocalypse’ hits on Saturday, leaving Britain trapped under 20-foot drifts and causing planes to freeze in the sky. Which I read about in the Express.” 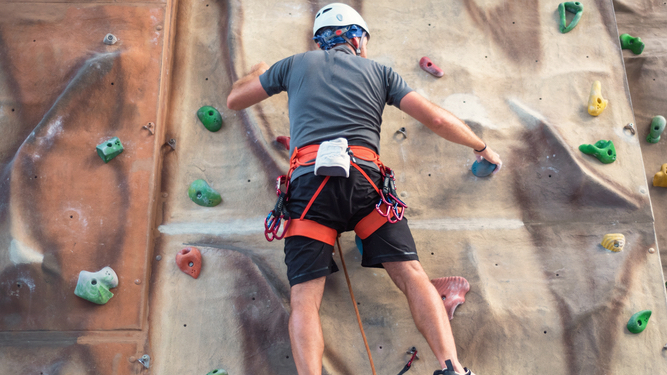 A MAN has added a whole new element of twattishness to his personality by taking up indoor rock climbing.

Recruitment consultant Nathan Muir is already a twat in many ways, but can now attempt to impress people with climbing jargon and dull anecdotes about things he has climbed.

He said: “Not many hobbies have as much potential for twattishness as rock climbing. After just a few sessions I’m already a pretty serious bore about it.

“It’s not a useless hobby either. If I’m ever lost in the wilderness and I need to scramble up a wall with strategically placed grips next to a crash pad, I’ll be ready.

“If I start outdoor climbing I’ll be able to tell everyone about getting up absurdly early to climb a rock face they’ve never heard of. And I can bang on self-importantly about the importance of safety.

“Because it’s a full-body exercise I can feel every single part of me becoming more irritating each time I go. I’ll be a Piers Morgan-tier twat in no time.”

Climbing instructor Emma Bradford said: “Nathan’s already throwing baffling terms like ‘bouldering’ into everyday conversations. I think he may have a natural aptitude for twattishness.”