Employers have been told that if they expect their workforce to come in and toil like good little soldier ants after their late-night misery, they have got another think coming.

Accountant Martin Bishop said: “After six solid hours of shouting at the TV every time Laura Kuenssberg announced another Tory gain with barely concealed glee, work can f**k off.”

Coastguard Norman Steele agreed: “I won’t be going on shift today. Anyone who decides to spend Friday 13th going for a swim in choppy waters instead of staying in bed wishing it was a dream can bl**dy well drown.”

All British workers are now expected to do b*gger all until 12pm on the dot, when they will go to the pub for a long liquid lunch and possibly not return.

Police officer Stephen Malley said: “It goes against my professional ethos to stop catching thieves and murderers, but everyone at the station was up till 3am and we’re all really tired and depressed.”

Shoe shop assistant Emma Bradford said: “I’m going home. Anyone wanting to buy shoes, take your pick and leave the cash in the honesty box. There’s probably your size in the basement.”

I never said I'd get Brexit done, says Johnson 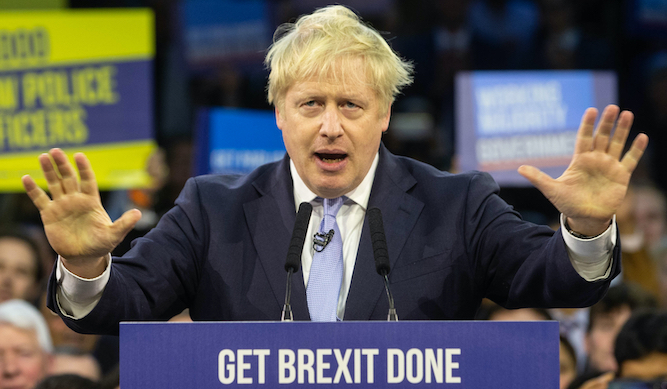 BORIS Johnson has insisted this morning that at no point did he say he would get Brexit done.

Johnson, looking like he had taken part in a 24-hour pie eating contest, stressed that anyone who claims he would get Brexit done was ‘merely spreadulating faux news items’.

Johnson said: “I’ve never said I’d get Brexit done. Show me the proof. And I also didn’t refuse to look at that picture of the boy in hospital the other day and then pocket the journalist’s phone.

He added: “Did you see that guy get punched at the hospital the other day though?

“The grim reality of politics, really.”