MICHAEL Gove has told the people of Kent that the all-pervasive smell of lorry drivers’ excrement will actually be a ‘Brexit bonus’ for the county.

In particular he sought to reassure Brexit voters, who thought they were getting £350 million a week for the NHS, zero immigration and bendy bananas, but are literally getting shit instead.

Gove said: “Our world-beating portaloos may not be able to cope with every call of nature from lorry drivers. And thanks to hearty English breakfasts with their cheap sausages, it’s going to be pretty pungent.

“But we must focus on the bonuses. For example, the faeces deposited under hedgerows can easily be repurposed, using British enterprise, as fertiliser for our wonderful English roses.

“They say Kent is the ‘garden of England’. Well, this garden will have more than adequate supplies of manure.

“I can assure residents that the county will be as desirable to live in as ever, once you’ve got used to the smell and finding alternative routes round the traffic jams.”

When asked who would retrieve the excrement, Gove said: “Don’t worry, there’s plenty of migrant workers who’ll happily do that sort of thing. Ah. Let me get back to you on that one.”

Legendary comedy series 'Scotland in a tournament' returns for 2021 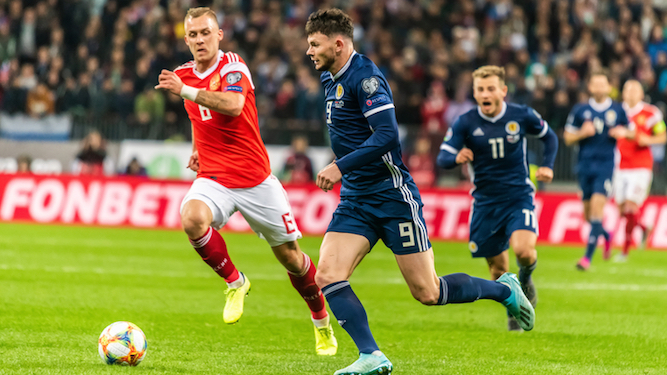 THE BBC has delighted viewers by announcing the surprise return of much-loved comedy series ‘Scotland in a football tournament’ next year.

The comedy has not been screened since 1998 but was a favourite of British viewers throughout the 70s and 80s, with highlights including a 1-1 draw with Iran keeping the nation laughing through dark times.

A BBC spokesman said: “Last year we brought back Gavin & Stacey. In 2021 it’s the Scottish national team’s turn to keep everyone smiling.

“People are going to be asking ‘How could they be back in a tournament, after last time?’ but we’ve concocted a convincing backstory involving consecutive penalty shootout wins to explain the seemingly impossible.

“I can’t reveal what’s going to happen, but if you like classic slapstick moments from the past like losing to Costa Rica, or bittersweet bathos like beating the Netherlands and getting kicked out on goal difference, get ready to split your sides.”

Stephen Malley of Reading said: “It was the funniest show, there’d be all this build-up and hype and then they never get past the group stage, not ever, not even once. I can’t wait.”

However Bill McKay of Inverness disagreed: “I never liked it personally. It wasn’t funny. It was just cruel.”