I wanted to visit the Queen to test my eyesight, says Johnson

THE prime minister only requested a face-to-face meeting with the Queen during the pandemic to ensure his vision was okay, he has confirmed.

Johnson defended himself after former aide Dominic Cummings revealed he intended to visit the 95-year-old monarch while potentially carrying Covid-19 by using the classic get-out that he just wanted to test his eyesight.

Speaking from behind a school fete table hastily erected in Downing Street’s rose garden, Johnson said: “My eyes had been playing up, as I explained to Carrie when I pinched an arse that wasn’t hers.

“So I thought I’d test myself in an honest, patriotic Conservative way by seeing how close I could get to Her Royal Majesty before I recognised her from the money.

“Not only would it give me an ocular workout, it might concentrate her mind on how to end this pandemic if I was spewing out Covid spores just a few feet away. We’d probably be out of the woods by now if I’d popped over.

“Instead here we are a year later still struggling, and all because selfish, jealous Dom didn’t want me to treat Buckingham Palace like Uxbridge Specsavers.”

Johnson added: “What’s the problem? You swallowed all this crap last time.”

Memoir largely about all the birds I've shagged, confirms Harry 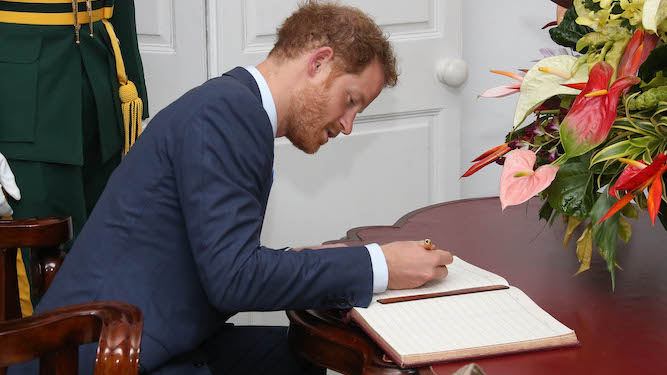 PRINCE Harry has revealed his forthcoming memoir will mainly be about his sex life and shooting the Taliban, with a self-help bit at the end to keep the wife happy.

The memoir, which has the provisional title Prince of Pussy, will begin as Harry leaves Eton and cover his sexual exploits throughout his gap year, military service and general life as a randy playboy Royal the whole world was looking to bone.

He said: “I do fill in other biographical details – for example, I mention that I came up with the idea of the Invictus Games in Colorado knobbing this truly spectacular American chick, boobs as big as your head – but only as background.

“It’s all in here: Chelsy Davy, Cressida Bonas, that blonde piece out of the Saturdays, the six strippers I played pool with in Vegas. And a few surprising revelations, ie Cat Deeley and Katy Perry.

“I was inspired by looking down at my cock in the shower and thinking ‘it deserves to speak its truth’.”

He added: “And there’s self-help stuff for Oprah. Though frankly I think she’ll be more interested in the time Michelle and I hooked up when Barack’s back was turned.”