Keir Starmer strangled Geronimo the alpaca, and other lies Boris can say at PMQs

YOU can say what you want in Parliament and they can’t touch you for it, as Boris Johnson proved when calling Labour’s front bench drug addicts. Today’s lies are:

As former director of public prosecutions, Sir Keir Starmer remains Britain’s official hangman and camelid executioner. Starmer strode into the poor animal’s enclosure, wearing a black hood, and compressed its airways with his leather-gloved hands until dead. Saying this is allowed.

Labour deputy leader Angela Rayner seems suspiciously calm in interviews when compared to normal, sensible politicians like Nadine Dorries. Parliamentary privilege means that there’s no issue stating outright that she is on heroin, or adding ‘her accent is proof’.

Not only did Starmer not prosecute Savile, he was a co-conspirator, covered up his crimes and tricked poor, helpless innocents like the Queen and Lady Thatcher into friendships with the monster. He should be charged with those crimes. Call me a liar and you’ll be kicked out.

The Evergreen getting stuck ‘accidentally’ was just a little too convenient, wasn’t it? All the work of that ardent anti-capitalist Miliband in a Communist plot to bring world trade to its knees. Hope the Speaker doesn’t issue a stern reprimand in my absence for this.

F**k it, why not. Starmer is Corbyn and Corbyn is Starmer. And Mao and Stalin and Che Guevara and, of course, Hitler. He forced the Tories to attend Downing Street parties at gunpoint, then killed their families anyway because he’s the Joker. I can say that. Call me a liar about the parties, bitch. I dare you.

Is it banter or are you a violent racist misogynist who should not be within a million miles of the f**king police? 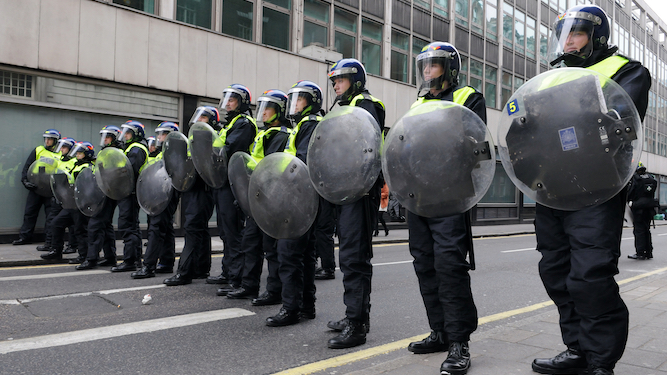 METROPOLITAN police officers have once again struggled to tell the difference between banter and hideous hate speech. Here’s how to tell:

You’ve unleashed the bantz, but is anyone laughing? BNP Dave, Trousers and that bloke the lads call Rapey McRapeface don’t count. If you’re afraid that people who aren’t sick f**ks and total bellends won’t laugh, rethink your attempt at humour.

Are you attacking vulnerable people you should be protecting?

As police, you’re in contact with some of the most vulnerable people in society, a high proportion of whom will be women. If you’re bandying around jokes about domestic violence and sexual assault, it’s time to ask yourself if you’re a dangerous wanker rather than a funny guy.

Even if you detest politically correct wokeness you should, as a human, have some idea of whether your repartee is grossly offensive and inappropriate for work. If you text female colleagues telling them you’d like to commit a serious sexual assault against them without fear of being arrested and fired, you are the wrong person in the wrong workplace.

Have you ever been reported for having a laugh?

Some people just can’t take a joke, can they? Especially when you harass and bully them into silence to stop them reporting your behaviour. If your comedy stylings disturb people to the point of speaking to your superiors, your jokes may not be funny or even jokes. They might just be threats.

Before you make another joke about killing black children, pause and ask yourself if your comment really is the height of wit or if you sound like a hair-trigger psychopath carrying out a racist vendetta. If it’s the latter, which it f**king is, shut the f**k up and look for a new job not working with any people at all.