Let's all vote for twats

THE UK has woken up and grimly set out to do its democratic duty by voting for an irredeemable f**king twat.

Across the country, voters are preparing to vote for MPs they despise to give parties they loathe a majority in parliament simply because the other side are worse.

Tom Booker of Stoke-on-Trent said: “I’m voting for an absolute snivelling ars*hole of a man called Gareth Snell, who’s keen on Brexit while I’m dead against it, to stop the Tories.

“I’m voting for him so Jeremy Corbyn, a sanctimonious f**khead I can’t see on TV for five seconds without scrambling for the mute button, gets closer to power. I don’t know how we ended up here and I wish it could stop.”

However neighbour Donna Sheridan said: “I’m backing Jo Gideon, our Conservative candidate who is a Kent councillor who probably can’t hear my accent without a reflexive sneer of disgust.

“I have to, because she’s backing Brexit and the sexually incontinent serial liar who leads her party promises he’ll get Brexit done, which means nothing, but is the best hope I’ve got.

“In short, like the rest of the country, I have no option but to vote for an utter twat because if I don’t the wrong twat might get in.” 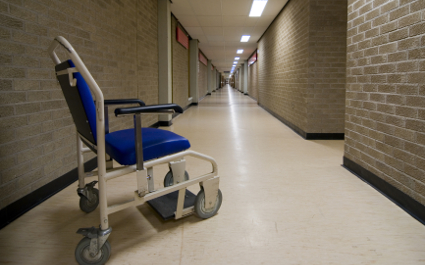 BRITAIN is watching the National Health Service being replaced by signs promising that an exciting new health provider is coming soon.

Across the UK, hospitals, clinics and doctors have been removedleaving only hoardings showing airbrushed images of fantastic healthcare being given to pretty people.

Francesca Logan, standing outside the razor-wire fenced 74-acres of waste ground that used to be the Royal Surrey County Hospital, said: “It’s all very well that 21st century healthcare solutions are coming soon to this space, but my baby’s due next week.

“Though it has solved the problems with parking.”

A government spokesman said: “Unfortunately we found that across the country the NHS was under assault by the British public, who were draining its resources, exhausting its staff and even dying on its premises, leaving it in an absolutely terrible state.

“Consequently we have taken the difficult decision to remove the NHS from the British Isles until further notice.

“We apologise for any inconvenience this might cause over the next few years, but if you do find you need urgent surgery call 111 and automated voice menus will guide you through the necessary steps.”