May has weird dream where she's done no preparation for Brexit

THERESA May has had a classic anxiety dream in which she totally failed to do any preparation for Brexit, she has revealed.

The dream – of the type where the dreamer believes they are about to sit an exam but have not revised – made the prime minister extremely relieved to wake up and discover it was not real.

May said: “It was like one of those dreams where you’ve got A-levels the next day but you haven’t done the work and you know you’re going to fail.

“It was all very strange. I was sitting in a big corporate office and a Belgian man kept saying ‘Have you done your Brexit, Mrs May?’. I looked in my briefcase and of course there was nothing there.

“Then a younger man came in and said ‘No cake for you, Mrs May!’ and they laughed. It’s funny really how your sleeping mind can convince you this sort of ridiculous scenario is totally real.

“Then I noticed I wasn’t wearing any trousers so it must be a dream. I do remember seeing a calendar on the wall saying 29 March 2019, so I wrote that down in case it means something.”

May is currently due to meet EU leaders in Brussels to deliver her final attempt at a Brexit plan, at which point she will scream like a character in The Twilight Zone.

Where are you on the Brexit thickness scale? 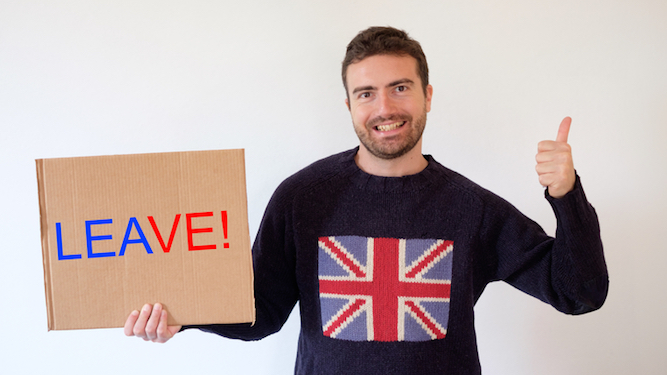 HAVE you completely abandoned sense and reason over Brexit? Find out how you rate on the ‘Brexit thickness scale’ by seeing if you hold any of these views.

‘Politicians need to work together’

How exactly do you expect people to ‘work together’ on entirely incompatible things? You wouldn’t expect Mary Berry to work with James Dyson to bake a plastic cake that sucks up dust. Thickness level: 1

‘We must respect the referendum result’

A quick analogy: you book a family holiday to Somalia because it’s sunny and cheap. However, upon googling it you realise you will probably die. Then you pack your shorts anyway and hop on a flight to Mogadishu. Thickness level: 2

‘We have to leave to prevent riots by the far-right’

Utterly weird logic in which you immediately bow to a questionable threat you should resist anyway. Like letting a five-year-old drive off in your car because he threatened to duff you up. Thickness level: 3

‘Just get out now’

Repeated ad nauseum on BBC Question Time. Unfortunately the subtext is: “I have no interest in understanding this huge, idiotic mess I voted for.” Thickness level: 4

‘The EU is going to collapse’

Brexiters arrive at this conclusion by wishfully overestimating the importance of, say, the ‘gilets jaunes’. It’s like thinking Marvel is going to stop making superhero films because your mate Dave fell asleep during Ant-Man. Thickness level: 5

‘We’ll sort something out’

When optimism intersects with stupidity. We probably will ‘sort something out’, but what? Being murdered ‘sorts out’ your old-age care arrangements, but it’s not ideal. Thickness level: 6