Nadine Dorries' guide to getting ahead with insane, sycophantic arse-licking

HI, I’m Nadine Dorries and I stuck my head so far up my boss’s arse that he gave me an important job I’m terrible at. Here’s how you can do the same.

Start with some fairly normal sucking up

If you’re as talentless as me, there are limited routes to the top. Lay the groundwork for future promotion with a bit of general sucking-up: tell your boss how wonderful he is, even if he’s disorganised, bad at communicating or has just made millions of people hate his guts by having parties during a national health emergency.

Being dedicated is fine but loads of crawlers are dedicated, especially in the Conservative party, so you have to go a step further to stand out. Sound like a fanatic and talk about your ‘undying loyalty’. It’s a weird thing to say about your boss if he’s not Stalin, but now I’m personally in charge of crushing the Marxists at Channel 4, so a total lack of self-respect has really paid off.

Gaze at your superior with frightening adoration

Practise by watching David Koresh’s home movies. Then make sure the whole world can see how much you worship your boss. Luckily I can do this on telly at PMQs but you can do something similar in the staff canteen.

Attack colleagues who step out of line

Make yourself look even more slavishly dedicated to your boss by viciously attacking colleagues who dare to go against him. However, you can go too far, as I did when I described Jeremy Hunt’s Covid preparations as ‘wanting and inadequate’. Sometimes I’m humping Boris’s leg so hard I forget we’re all meant to be on the same side.

Enjoy it while it lasts

Sycophants are out on their arse when the boss goes, so enjoy your elevated position while it lasts. I’m hoping to make my mark by shafting public service broadcasting, and why not? But I’ve wisely got a back-up plan. When Boris gets kicked out, and the novelty of his teenybopper wife has worn off, we can live in a lovely little cottage together. He can write his Telegraph columns and I’ll gaze at him adoringly all day. I’m sure he’ll be up for that. 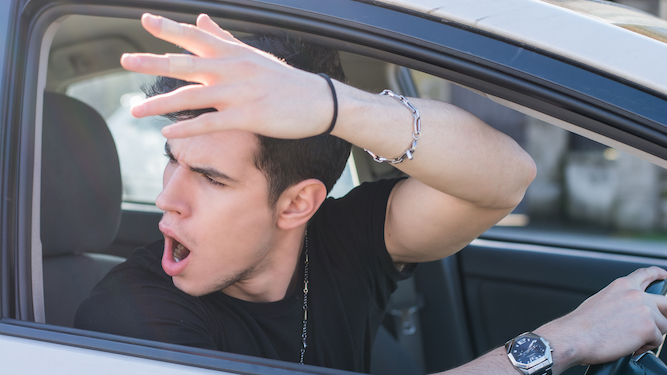 DRIVING like a lunatic is the best way for men and women – but especially men – to work off feelings of rage and frustration, research has proved.

The Institute for Studies found that driving at high speeds, trying to run cyclists off the road and swearing at other drivers until red in the face all have a beneficial, cathartic effect.

Professor Henry Brubaker said: “It’s harmful to bottle up self-pitying, brooding feelings of resentment. Drivers should let out these feelings in a healthy way, such as screaming ‘Move, you stupid bitch!’ at an old lady on a zebra crossing.

“Motorists who drive aggressively and irresponsibly, rev their engines loudly at traffic lights and chase after cyclists who’ve annoyed them in the style of the film Duel, are more likely to live longer, healthier lives.

“The longer irrationally angry, red-faced men and women live, the better for all of us.

“There is the small downside of the injuries and deaths their behaviour will cause but this has to be weighed against the massive health benefits of unhinged anger.

“By contrast an outwardly calm Buddhist who meditates and drinks herbal tea will have no ‘safety valve’ and may move straight onto mass murder with no stages in between.

“My personal research supports all of this. Forcing some lycra-clad narcissist on a mountain bike into a ditch made me feel miles better.”