AN organisation of elderly fascists known as ‘the Tory grassroots’ is to install a megalomaniac man-child as ruler of the UK.

The Conservative party’s radicalised membership is expected to install Alexander Boris de Pfeffel Johnson as PM, mainly to annoy lefties but also because to them he is young and impressive.

Party member Mary Fisher, 78, said: “Boris is extremely posh, which is a sign of good character. He’s also very rugged and handsome, like a young Mussolini.

“Yes he’s simple, but all he’s got to do is tell the French and Germans to sod off. How hard can that be for an Old Etonian even in fluent Latin?

“I’d like him to bring back beheading and criminalise sodomy illegal again, but that’s probably too much to ask with all the political correctness and women these days. Still you can dream.”

“And if he turns out to be a national embarrassment who reduces Britain to a midden of idiots fighting for fish heads, it doesn’t matter because I’ll be dead soon.”

The new prime minister will today  announce pensioner-friendly policies including military service for the under-50s, a tax on frippery and a no-deal Brexit, only to laughingly ignore them thereafter.

Winner of Nigel Farage lookalike contest to be announced 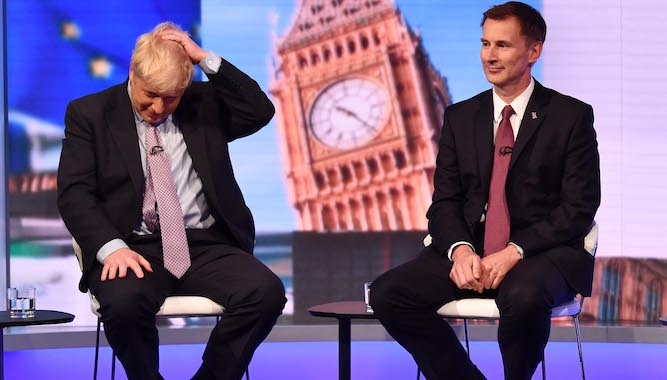 THE UK is waiting to find out who has won a Nigel Farage lookalike contest and will be awarded the grand prize of Britain.

The contest was judged by a group of short-sighted elderly people on the criteria of Xenophobia, Straight-Talking Honesty, Patriotism and Faragability, with the winner made prime minister for an indefinite period.

Margaret Gerving, a retired headmistress from Guildford, said: “We can’t have Mr Farage as prime minister because it’s beneath him, so it’s up to us to choose the next best thing.

“I like the way this Boris makes things up as he goes along, that’s very Nigel, and the withering contempt he has for any facts the other side try to use against him. I can’t be doing with facts at my age.

“On the other hand this Jeremy character doesn’t have that dangerous taint of cosmopolitanism about him and he sneers very well. You can do a lot with a sneer.

“But ultimately which of them will be able to take us into a no-deal Brexit, blame everything that goes wrong on anyone who was against it, then walk away unconcerned? Come on. Who else?”

She added: “Of course he’ll only be in until the Queen takes direct rule with Farage himself as her Grand Vizier. But it’s a bit of fun.”