AN incredibly drunk Nick Clegg has been swearing violently at a pigeon in central London.

It is understood the distraught former Lib Dem leader started drinking ‘very early’ and by midday was standing in Trafalgar Square telling a pigeon it was a ‘manky racist bastard’.

Eyewitness Jane Thomson, said: “He was swaying dramatically and had clearly singled out this one pigeon.

“He was pointing at it shouting ‘you baldy prick, I’ll kick you up the fucking ringpiece. Just because you were in the army, you don’t scare me’.

Thomson added: “And then I realised that he was so utterly hammered he thought the pigeon was Iain Duncan Smith. We’ve all been there.”

The pigeon, Tom Logan, said: “I feel for the guy. I’m a passionate pro-European myself, so it’s a difficult day. Anyway, have you got any crisps or are we just wasting each other’s time?”

Scotland wants independence too, but in a bad way 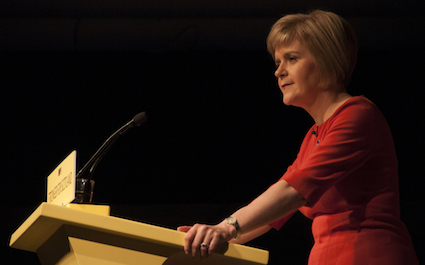 SCOTLAND wants independence in a way that is nationalistic rather than patriotic, according to the government.

Yesterday’s vote in the Holyrood parliament for a referendum has been condemned as a misguided attempt to imitate the UK’s historic vote of last year but getting it completely backwards.

A government spokesman said: “It would be cute if it wasn’t so deluded.

“What the Scots, bless them, have done is mistaken freedom from the iron hand of Europe, a despotic empire bleeding the UK dry, for freedom from the benevolent rule of Britain which only has their best interests at heart.

“It’s childish really. And we’ve tried to tell them, but instead they’ve voted to have a referendum which they’re not allowed and which is simply ungrateful.

“Deliberately spoiling our big day of throwing off the undemocratic shackles of the EU is just rude. We might have to punish them by taking their parliament away.”