BARRY Chuckle has taken a shock three-point lead in the run-up to the general election.

Although the wiry Chuckle sibling is not currently running for office, a YouGov poll showed that he was considered ‘most trustworthy’ on issues such as the economy, education and manoeuvring bulky objects through doorways.

Labour and Conservatives have already suggested they would consider a coalition with Barry Chuckle on the understanding that his panto work did not interfere with the duties of deputy prime minister.

Chuckle’s popularity with the voters has caused a rift with his brother Paul, who studied Political Science at Cambridge and has worked in an advisory capacity for a number of left-wing think tanks.

Meanwhile Channel 4 has commissioned a speculative docudrama titled The First 100 Days Of Chuckle which shows Barry accidentally covering Angela Merkel in paint during an EU summit and getting his head stuck in the Speaker’s Chair during the state opening of parliament.

Manchester to be completely covered in spikes 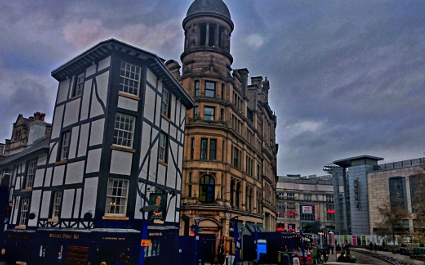 THE city of Manchester is to cover all pavements, walls and street furniture with metal spikes to stop locals getting soft.

The move follows the installation of pavement spikes outside Selfridges, which are packed 24 hours a day by dozing Mancunians proving that their rain-hardened skin feels nothing.

Mayor of Manchester Bill “Macca” McKay said: “The more pain you can take, the more Manc you are.

“These needle-like spikes can burst a dropped melon so they are perfect for doing one-handed press-ups in front of your mates.

“They go well with the constant freezing sleet, the noonday darkness, and the unbearable itching caused by the Scousers being less than 40 miles away.

“From now on the city will be as open and welcoming to outsiders as a Judas Priest jacket turned inside-out, though obviously that’s still a lot less hostile than our evil twin Salford.”