Because I'm worth it, by Priti Patel

Because I’m a maverick. I make no apologies for that. Like Crazy Riggs or Mel Gibson, I don’t play by the rules. I intimidate, I’m responsible for countless cases of constructive dismissal, I got fired for breaching the ministerial code. But I get results. Just don’t ask me to name any.

Because I’m diverse. Ethnically I’m Indian, my family’s from Uganda, and I’m horribly right-wing. Do you know how much that f**ks up Guardian readers? How powerless they feel when I go on a vicious diatribe against immigrants? I’m having a good smirk just thinking about it.

Because I hate the EU. I’m not some wishy-washy former Remainer like Hancock. I despise that filthy hive of languages and accents and cuisines. Britain won the war therefore the whole continent should be British and speaking English. It’s a direct insult that they still exist.

Because I hate you. Not like those Etonians. They don’t know you. But I grew up among you and know lots of you are happy to suffer so long as people you hate are suffering too. And I’m totally happy to oblige with that. 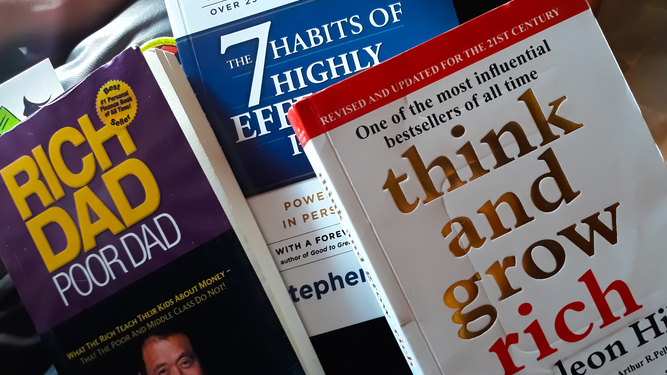 IF you’ve ever asked your friends for book recommendations, then you will almost certainly have had some prick suggest one of these titles.

Sapiens: A Brief History of Humankind

Usually just an opportunity to prove how intellectual they are. They’ll say things like ‘fascinating’, but won’t be able to actually describe any specific sections of the book as they started skim-reading on page six and gave up on page 22.

Someone has decided to take the life advice of Jordan Peterson, a man whose views on gender roles would make a 1950s Northern dad tell him to ‘be more open-minded’. Apparently eating beef cures depression, in which case why bother with antidepressants and just fry up a rump steak instead?

The 7 Habits of Highly Effective People

This person is trying to prove they’ve mastered a guide to success. But they’re not successful, and successful people don’t waste hours reading bullshit books, preferring to use the time to make money and spend it.

Anything by Malcolm Gladwell

While the books themselves are entertaining, this person is simply doing more intellectual dick-swinging. Gladwell came up with the theory that you need to spend 10,000 hours mastering a skill like the piano. Still, your friend has put in plenty of hours toward becoming an expert dick.

The Power of Now: A Guide to Spiritual Enlightenment

If someone recommends this book to you, be prepared to listen to a long, rambling diatribe full of New Age jargon. The go-to coffee table book for people whose coffee tables also feature a bong and a dream catcher.

Many people owned a copy in the 90s but didn’t actually read it because it is boring and pretentious in a dull arty-farty way. Possibly worth reading if you’re male and an arsehole and need a pseudo-scientific argument for why men frequently act like dickheads.