TONY Blair has appointed a sinister clown to stalk Gordon Brown for the next two years in a bid to drive the Prime Minister "even further round the bend".

Mr Kranky will trail Gordon Brown in a tiny car and act aggressively in his presence while wearing a huge painted smile to create a paralysing sense of confusion and unease in the mind of the Prime Minister.

He will also live in a bush in the back garden at Downing Street and lurk ominously in the shadows thumping his overlarge feet on the ground whenever Brown peers out of his back window at night.

A source close to Blair said the former Prime Minister had hired New York-based Mr Kranky because he was "the best in the business", having recently driven a number of high profile celebrities totally insane, including Britney Spears and Tom Cruise.

He said just the thought of Mr Kranky trundling along behind him would be enough “to send Brown completely crackers”.

He said: “Blair knows that Gordon has a terrible fear of clowns. It started soon after he joined the Labour Party and has been getting steadily worse ever since. It got so bad at one point that just the sight of Robin Cook used to make him break out in a sweat. If he thought John Prescott was going to be in the room as well he would nearly pee himself.”

Blair is known to have played on Brown’s clown phobia to his advantage on a number of previous occasions during the pair’s many bitter battles over the 10 years they shared high office together.

He used it to best effect on the night the pair met for their now infamous meal at London restaurant Granita when Blair turned up wearing an orange wig and a squirty flower in his lapel.

“Blair gave Brown his best joker grin and then hit him with two squirts in the face with the flower and Gordon just started sobbing 'I give in',” said the source. "It was brutal." 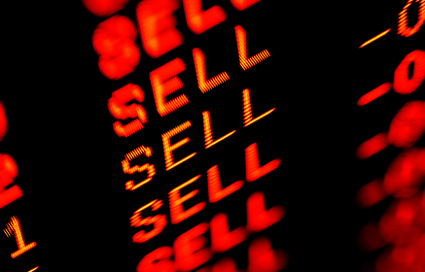 SHARES in London are down a million after squeezed credits in the sub-debt crunch market.

The FTSE 100 index of leading shares tumbled over on its side at one point and had to be helped up by two passing elderly ladies.

In Hong Kong the Hang Seng changed its name to Billy Yip and refused to answer the phone, while Tokyo’s Nikkei dyed its hair blonde and put on a short skirt.

In New York the Dow Jones failed to turn up for work for the second day in a row, and stayed home drinking vodka out of the bottle instead.

Charles Winstanley, leading equities analyst with UBF in London, said the markets had been spooked by an altercation in the US pork knuckle pens.

He added: “The sub-prime pork collapse in the States has gone full sausage.”

Mr Winstanley warned of further turbulence in the months ahead as the squeezed credits were forced back into their tubes.