TONY Blair is to return all his Agent Provocateur crotchless panties in protest at the saucy lingerie brand founder’s decision to reject his MBE.

Mr Blair, who normally wears either crotchless briefs or open French knickers underneath his Paul Smith suits, said he planned to switch his custom to Ann Summers or M&S instead.

And he said he was “outraged” that Agent Provocateur founder Joseph Corre, 39, had stooped so low as to use his panties as a political football.

Mr Blair said: “For reasons of hygiene, comfort and vague sexual thrill I have always favoured crotchless undercrackers while on important business for the country.

“Many of the long meetings and summits I have to attend take place in packed rooms that are extremely hot and humid and I have always gone open crotch to reduce the sweating about my privates.

“However, I would prefer to suffer the distraction of a damp and overheated penis than wear that disgraceful man’s scanties ever again.”

Mr Blair said he would be returning all his knickers immediately, even if some of them were used and slightly soiled.

Labour insiders said the Agent Provocateur founder’s declaration that he was sending back his MBE because he hated Tony Blair was a “cheap publicity stunt”  by a desperate man who knew he would not survive the change of regime at Number 10 .

One said: “Gordon Brown is perfectly capable of regulating the temperature of his own penis without any assistance from Joe Corre and his French fancies, he was never going to go crotchless like Blair."

Meanwhile, Mr Blair’s wife Cherie has let it be known that she intends to hold onto her extensive open crotch collection despite her husband’s protest.

This has led to accusations that the Prime Minister plans to continue going crotchless by simply wearing his wife’s underwear when out on business, making his dramatic panty return an empty gesture.

David Cameron, the Tory leader, said: "If Tony Blair and his wife conspire to allow him to carry on wearing panties with an open crotch I have no doubt that the British public will see right through them." 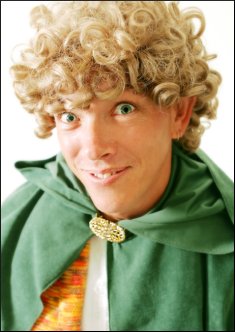 THE great nephew of Frodo Baggins has attacked the Lord of the Rings musical for 'playing fast and loose' with historical accuracy.

Ian Baggins said he was appalled at the way his relatives were represented and described the production as a slap in the face to decent hobbits.

Mr Baggins, a tax accountant from Worcester, said: "According to this show not only did my great uncle Frodo save Middle Earth from evil, but he was an outstanding professional singer.

"The truth is he was a cowardly little tit with a voice like a cow stuck in a hedge."

He added: "Bilbo Baggins was a thief, a traitor and a second-rate pornographer. He should have been hung in the village square."

The multi-million pound West End spectacular has received a number of unhelpful reviews.

The Daily Mail's Brian Popple said: "Halfway through the first act I turned to the woman sitting next to me, handed her a machete and pleaded with her to cut off my head."

The Guardian's Andrew Blamms, said: "When Thespis first performed in Athens in 550 BC little did he know that 2500 years later the theatrical arts would be reduced to hairy, tuneless midgets and their insatiable appetite for knocked-off jewelery."

Writing in the Daily Express Ronan O'Harple said: "It was so bad I actually shat myself."