THE UK will celebrate independence from the EU by repealing all European laws and replacing them with unchanged, but British, ones.

The Great Repeal Bill, introduced to parliament yesterday, will strike every single one of the EU’s hated and nonsensical laws from the statute book and replace them with good old common sense traditional functionally identical home-grown legislation.

David Davis said: “From now on no unelected Eurocrats will tell us how powerful our hoovers can be or what we can feed our pigs on.

“Instead solid British laws, made right here in the home of Shakespeare, will govern our lives fairly and squarely, and by being exactly the same as the laws they replace will also allow us to trade in Europe.

“This bill, which will update in parallel with all future EU legislation, promises a brave future of independence for Britain as long as we continue to meet all continental standards with regard to sale of goods and services.”

He added: “We’ve got rid of all the human rights laws, though. They were just holding you back.” 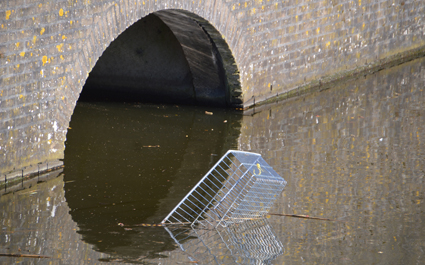 THE new pound coin has forced Tesco to unlock its trolleys, most of which are expected to end up in Britain’s waterways in the next few days.

Fans of mindless vandalism are gearing up for several weeks of trolley-based shenanigans whilst the superstore modifies its locks to accept the new 12-sided coins.

Vandal Emma Bradshaw said: “Before supermarkets introduced those annoying locks I would often nick a trolley, take it down to the canal and just sling it in. There was no point to it, but I liked doing it.

“Rivers and streams were littered with trolleys, creating terrible eyesores and traps for fish. If you chucked a few in at the right point you could even cause a flood. It was a special time.

“And then everyone gave up on it because they had to put a pound in to get a trolley and they wanted their pound back when they’d done their shopping.

“It’s hardly a massive financial incentive, especially when you consider the pure, unadulterated joy of watching a floating fag packet get jammed in a wheel. You can’t put a price on that.”