British Cabinet grips fans by killing off a character every week

NEW streaming series The British Cabinet is picking up millions of fans who enjoy television that is not afraid to kill characters off.

The deaths of Michael Fallon and Priti Patel on consecutive Wednesday nights has created a real buzz about the UK cabinet, which is available on Netflix in the US.

Wayne Hayes of Madison, Wisconsin, said: “I’m telling all my friends about it. It’s like The Walking Dead but more bloodthirsty.

“There’s all these backstabbing characters on an impossible mission to find something called the Brexit which will apparently heal their ruined world, if it even exists.

“But they’re being attacked from every side, none of them trust each other, the leader’s falling to pieces and there’s a real mounting sense of dread because any of them could die at any moment.

“After last week you were like, shook, because they killed off that Fallon dude, so you thought nothing would happen this week but the tension just built and built and damn, they went there. Minor character but still.

“Can’t wait to see who it is next week. Nobody’s safe.”

Hayes added: “It is a bit ridiculous that Boris is always in the most dangerous situations and gets away unscathed. But, y’know, you have to suspend your disbelief.” 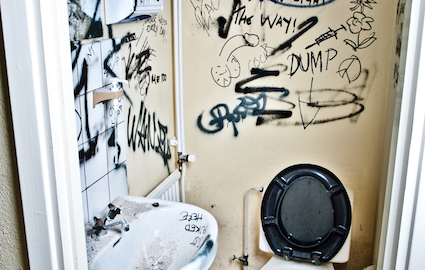 ANGRY people who scrawl offensive filth on the walls of public toilets can now make their messages twice as long.

Under new rules drawn up by toilet bosses, those who must vent every thought festering in their rancid minds to a largely indifferent public can now scribble a full 280 characters of vile bullshit before it is scrubbed out by a cleaner.

However, not all regular users of the Toilet network are happy with the news.

Warwick service station toilet scrawler Norman Steele said: “There was a certain purity to 140 characters. It forced you to hone your thoughts to a succinct essence. As Thoreau said, “simplify, simplify.”

“Take my graffito of last Thursday, ‘HITLER = RIGHT’. A masterpiece of economy. Who needs verbosity when you have upper case?”

Fellow Sharpie-wielder Tom Booker agreed: “When I take a female commentator to task for her political impertinence, I could say ‘Despite your lack of pulchritude you are free with your sexual favours. Your views therefore matter not one whit.’

“But honestly I find ‘YOUR A FAT SLUT LOL’ a much more felicitous construction. Brevity is the soul of wit, after all.”