Brown 'Beats Crap' Out Of Mcconnell On Eve Of Poll

With the party clinging to power by its fingernails the Chancellor lashed out at the Scottish Labour leader, accusing him of "disrespect, disloyalty and being rubbish".

Like a scene from the Godfather, Brown chased McConnell down the corridors of Labour HQ, hurling obscenities and wielding a dustbin lid.

It's the first time this year that Brown has administered a full-scale beating to a Labour colleague.

Usually the Chancellor will use more subtle methods of control such as putting salt in a sugar bowl or taping over their favourite programmes.

A source close to Brown said: "It's been a long time coming. Jack thinks he's the man but when Gordon gives an order you don't ask questions, unless you want a bowling ball dropped on your foot 'by accident'."

An ally of McConnell said: "He fought like a tomcat. Brown is bigger and heavier but he had reinforcements. I'd like to see them go at it again, but next time just the two of them." 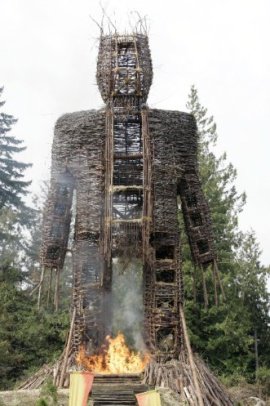 It's set to be the most historic night in Scottish politics since blah blah blah…. Union in jeopardy…. blah blah…. end of Labour domination….. blah blah…. is Gordon Brewer feeling alright?

10.14: Brian Taylor is winched into an upright position.

10.16: Bernard Ponsonby steps into his harness.

10.47: The first result is due from Hamilton South. Labour's Tom McCabe is defending a 6000 majority and is wondering why no-one wants to stand next to him.

11.24: The Edinburgh North and Leith result. Labour's Malcolm Chisholm gets ready to attach his celebratory moustache.

1am: Under the desk, and with the skill of a master craftsman, Gordon Brewer carefully removes his trousers.

2.04: In the Western Isles, Labour's Alasdair Morrison is sacrificed in scenes horribly reminiscent of the Wicker Man.

3.10: Huge cracks start to appear along the border and a foul smelling ooze consumes several nearby homes.

5.25: Jack McConnell steps briefly from his jacuzzi to freshen his drink.

7.45am: Council of nobles annoints Bruce Rioch as King of Scotland. Well done everyone.