GORDON Brown dismissed claims of bullying last night and threatened to ruin the life of anyone who says different.

As Christine Pratt, the chief executive of the National Bullying Helpline, said the prime minister was a psycho, Mr Brown stressed it would be very difficult to run a helpline when all your phones have been cut off and your jaw is wired shut.

A Labour source said: "Ed Balls is already feeding all kinds of interesting facts about her to the Daily Mirror. Did you know she's a former member of the Real IRA who used to beat up Macmillan nurses in her spare time?

"And of course if that doesn't work we'll just get Alistair Campbell to take her out for a nice cup of coffee and show her a photograph of David Kelly."

Earlier Lord Mandelson appeared on BBC1's Andrew Marr Reads the Papers to defend Mr Brown and insisted the heavy bruising around his eyes and mouth had been caused by foolishly placing his head in the way of a flying laptop computer.

And on Saturday Mr Brown told Channel Four's Krishnan Guru-Murthy that he had never hit anyone in his life, before asking the interviewer where he lives and what time he usually gets home from work.

But despite fresh evidence of Mr Brown's raging psychosis, weekend polls show Labour closing the gap on the Tories as around one third of the country insisted Mr Brown had been under a lot of pressure recently and that it was really their fault for getting him so angry.

A Downing Street spokesman said: "Some weeks he's Spiderman and other weeks he is his own arch-nemesis, Doctor Octopus. It would appear we are in the midst of an octopus week."

Meanwhile Piers Morgan is to follow up his landmark interview with Mr Brown by asking Serbian general Ratko Mladic why he is so clever and how many dolly birds he pumped at university.

Woods 'Had Sex During Apology' 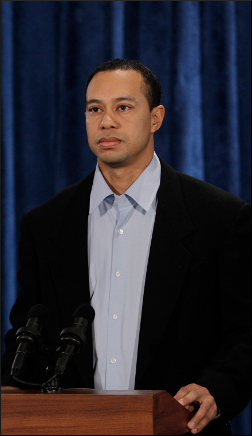 TIGER Woods had intercourse with up to five different women during his televised apology, it emerged last night.

The world's greatest golfer used mirrors, lighting and a trap door to conceal a steady supply of fresh sex partners during his emotional 14 minute statement.

It is understood the words 'sorry' and 'apologise' were used to signal when it was time to change vaginas.

"Copperfield adapted many of the techniques he used to make the Statue of Liberty disappear, except in this case it was a string of naked lapdancers on all fours."

According to the source, when Woods said 'sorry' the girl would descend through the trap door and seconds later another one would be elevated into position and locked on to his penis.

The source added: "The fact that he was able to bring pleasure to these women and himself, with an almost imperceptible movement of his hips, is testimony to his immense, God-given skill and athletic poise.

"I'm really proud of him today. Tiger always said that he would not be able to move on, repair his marriage and resume his career until he had fucked at least five women on live TV."