GORDON Brown has unveiled his plan to slash Britain's deficit by making lots of pathetic little wooden things and then selling them from a table outside his house.

The prime minister has already made what he insists is a hedgehog out of an old brush head and some twigs he found in the back garden.

Mr Brown said: "I've used little black buttons for the eyes. They're a bit wonky but I think it gives him character. He's yours for £2.5bn.

"Let's see, what else do we have? There's a toy submarine that I made from some acorns held together with Blu-Tack, that's £800m. And there's also this little box made from bits of other boxes where you can keep odd cuff-links and old padlock keys, just in case.

"I'll tell you what, I can let you have the cuff-link box and the acorn submarine for £1.2bn. I must be out of my mind."

He added: "I'm also selling some old bits and bobs I had lying around the house. I've got a Ronco Buttoneer – very useful – a bag full of elastic bands, a plastic cup and this rather exotic looking thing called URENCO which, apparently, stands for the Uranium Enrichment Company. I'm not sure what it does, but I'm sure somebody will find a use for it.

"This? Well this is actually an owl made from corn-on-the-cob. It is, it's just a very special kind of owl that doesn't really look like an owl. Please buy something."

Economists said the Downing Street wooden knick-knack and car boot sale was unlikely to have a significant impact on the public finances, mainly because most of it was rubbish, apart from the Buttoneer.

A Downing Street spokesman said: "It has been fairly quiet so far this morning, though we have had a few inquiries about URENCO from some angry, heavily-bearded men with mad, staring eyes." 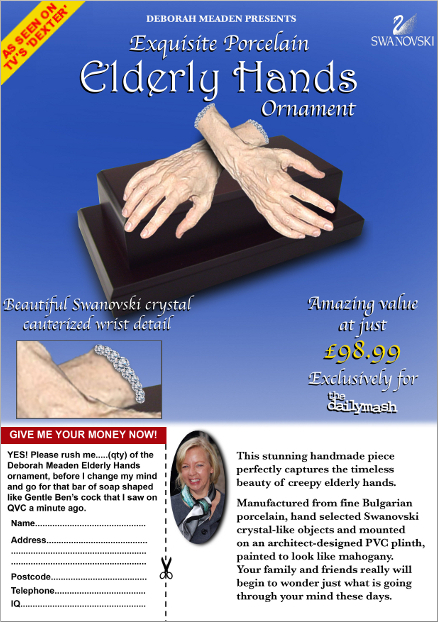