Cameron and Clegg clash over how to elect greedy, incompetent freaks

David Cameron and Nick Clegg will today set out their opposing views on the mechanism by which the House of Commons is filled with thieves, cretins and weirdos.

The prime minister will insist first past the post ensures each greedy freak is accountable the moment he gets caught, while the system also provides stability and certainty except when it doesn’t.

Meanwhile the deputy prime minister will claim it is time for Britain to move into the 21st Century and elect its oleaginous scum and petty, childish, self-serving morons proportionately.

Mr Clegg said: “The first past the post system is out of date. I don’t have to explain what that means. It just is.

“Also, the PR system means policies will be formed through discussion and compromise, unlike now where each party finds them buried under an old tree.

“And let’s not forget that it was being elected disproportionately that turned politicians into brazen thieves rather than them just being the worst people in the world.”

But Mr Cameron insisted first-past-the-post has delivered historically decisive results, such as in 1979 and 1997, resulting in popular governments that were not filled to the brim with the sort of grimy bastards you would have enthusiastically fed to a shark.

He added: “Also, don’t forget Nick Clegg will eventually be forced out and replaced with some fucking hippy who will condemn Britain to an eternity of Milibands and Harmans where everyone enjoys exactly the same amount of unremitting misery.”

If you are the kind of person whose life is so bad you think you need a politician to make it better, the PR referendum will be held on May 5th.

What is the alternative vote?
Under the AV system, voters rank candidates in order of height before ranking them again in order of stench.

The candidate with the most points goes through to round three where he must beat a pair of local schoolchildren in a Blockbusters-style quiz.

If he fails then the second-placed candidate takes on the children and if successful then goes on to wrestle a kangaroo.

The fifth round involves defusing a live feminist before the clock reaches zero and in the sixth and final round they have to sing a song in front of an audience of easily unimpressed Glaswegians.

Whoever makes it through all six rounds then gets to treat you like a child while stealing your money.

Call for Middle East protests to be about Cheryl Cole 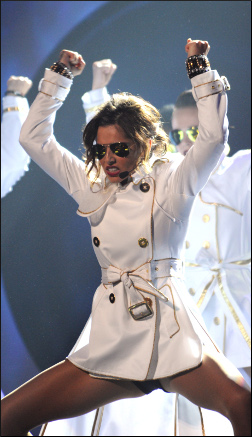 THE wave of protest across the Middle East needs a unifying theme that any moron can understand, it was claimed last night.

Experts warned that unless the protesters picked one thing or person to be either for or against then Westerners would continue to dismiss the unrest as something to do with the hot weather.

Julian Cook, professor of simplistic explanations at Reading University said: “In 1989 lots of haggard-looking eastern Europeans said ‘we want Levis’. We had discovered the universal language of overpriced jeans.

“Unfortunately this doesn’t seem to be about Levis, or rock’n’roll, or even freedom for that matter.

“In Egypt they just wanted to get rid of one guy and didn’t seem at all bothered when the army took over. In Tunisia it seemed to be about food prices and the first lady’s handbag collection, while in Bahrain it seems to be about religion, which from a marketing perspective is an incredibly bad idea.”

He added: “They need to get together on Facebook, pick something that their current system denies them and then make it all about that. My initial suggestion would be Cheryl Cole.”

Helen Archer, a woman who just can’t quite seem to care about it from Hitchin, said: “I’m not sure why I don’t care, but I just don’t.

Bill McKay, from Darlington, added: “I sort of care a little bit but any enthusiasm I have for the protests is tempered by the worry that whatever it is they don’t like will be replaced by something insane that wants to kill me.

“The last time there was a revolution in the Middle East was Iran in 1979 when they replaced the Shah – by all accounts a bit of a fucker – with something insane that wants to kill me.

“If they make it about Cheryl Cole then at least it won’t be about something insane that wants to kill me.