Cameron Beginning To Realise Exactly Who He's In Charge Of

PRIME minister David Cameron was on the brink of resignation last night
after finally realising what British people are actually like.

Downing Street insiders said that since learning of the Facebook tributes to idiot murderer Raoul Moat, Mr Cameron has become increasingly depressed and has talked about taking up watercolour painting and moving to Umbria.

A source said: “As prime minister it’s his ultimate responsibility to protect the British people from external and internal threats, but in the last few days he’s realised that he doesn’t want to.

“We were in a meeting the other day and he was very subdued and just kept staring out of the window until eventually he said, ‘is it just me, or are NHS survival rates far too high?’.

“He then started sketching out this plan to radically reform it so that it gets much better at killing people. Especially people with blogs.”

A senior cabinet minister added: “What he absolutely must not do is go onto Facebook, the Guardian or the Daily Mail and start reading through the comments.

“If he does then there’s every chance he will try to steal a nuclear submarine and give it to Iran. It’ll be a bit like Hunt for Red October except that it ends with a load of warheads pointed at 60 million twats.”

Constitutional historian, Denys Finch-Hatton, said: “I have always believed that the defence of the realm can only be guaranteed if the prime minster does not interact with ordinary people under any circumstances.

“Because if they do, they invariably walk away from the encounter thinking, ‘I hope that person dies incredibly soon’.”

But Nathan Muir, an utter fucking dick from Peterborough, said: “It’s his own fault. If he wants to be in charge of me then he has to accept me for what I am – which is unspeakable.

“Now if you’ll excuse me I have to finish my ‘Raoul Forever’ collage and update my ‘Get Well Soon Cheryl’ Facebook page.” 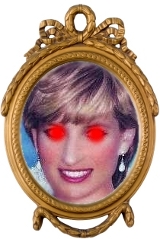 BIRTHDAY BONUS
The Big Man has brought in a new scheme to help make everybody’s deathday even better. He’s put together a catalogue of special powers and if it’s your anniversary, you get to choose one that you can have for one day only.

So anyway, last week the honour fell to Syd Barrett and Sir Arthur Conan Doyle’s turn. Barrett opted for the ability to swell his head up like a balloon so that he could float above everyone and fart clouds of pink gas everywhere. He looked like a twat.

Meanwhile Sir Arthur took advantage of the extendable handlebar moustache. Once applied to the face, the wearer can extend to the length of a hundred feet within a couple of seconds. Sir Arthur used it to catch the dead ones out of The Golden Girls and gently lick their faces before letting them go again. Cheeky bastard.

EVERYTHING MUST GO
Back on Earth, my family made a few bob from selling off some of my old stuff the other day – heirlooms, works of art, anything that Burrell hadn’t been able to squirrel away.

But thanks to my ingenuity the best stuff is safe and sound. I’m talking about the painting of the dogs playing billiards, the limited edition 56-sided Rubik Cube that Chas gave me for a wedding present and, most of all, the signed 12″ of We Close Our Eyes by Go West.

NO-GO FOR MOATY
Just been chatting to St Peter – administrative snafu meant that nutcase Moat wound up at the Pearlies hoping for a VIP pass.