THE inquiry into the Iraq war will leave out parts of the transcript where Tony Blair and George W Bush were exchanging bedroom intimacies.

Sir John Chilcots decision to omit pet names, coital exclamations and discussions about what position to try next time has been criticised by campaigners.

Tom Booker of the Stop the War Coalition said: Were told that these are sweet nothings, murmured words of devotion and cries in the heat of passion.

But how do we know that Bush didnt say This babys the only real weapon of mass destruction in this whole deal, or that Blair didnt reply Use me, use me like Ill use the ill-won consent of Parliament?

A spokesman for the former Prime Minister said: There are parts of the transcripts that, for security reasons and to ease the pain of a broken heart, should not be put in the public domain.

After sex Bush usually liked to talk about Kennedys real assassin, whats stored at Area 51, the USs teleportation technology thats being kept from the public and the hollow earth.

Nobody needs to know anything about all that. 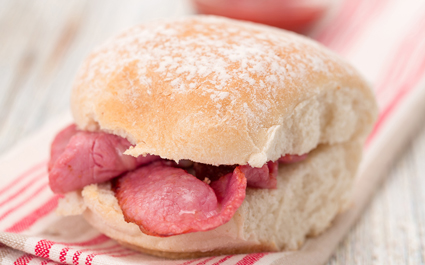 DAVID Cameron has used cutlery to slice a bacon roll into fine slivers.

The prime minister is the latest politician to use the consumption of bacon in a bap to demonstrate empathy with the proletariat.

Cafe worker Tom Logan said: “He brought his own silverware, wrapped in a cloth napkin stamped with his family’s crest.

“He cut the bacon roll into thin strips, swallowing each one whole as if to avoid triggering his gag reflex. It was the creepiest thing I have ever seen.

“Then he bent double, dry heaved and said ‘Give us a cuppa over here, me old mucker, cor blimey’.”

Last week Ed Miliband blamed ‘excessive slipperiness’ after he tried to eat a bacon roll by putting it in his ear.

Meanwhile Nick Clegg has eaten a bacon bap by gripping it in his feeble, broken man’s fingers and taking weak, exhausted little nibbles.