THE government is undermining Question Time‘s role at the
heart of the British constitution, it was claimed last night.

The Queen has asked the Privy Council to review the status of the BBC programme after the government refused to provide a panellist, in defiance of the 1873 Question Time Act.

A Downing Street spokesman said there was currently no need for curfews and internment as David Dimbleby was sent north to Berwick-Upon-Tweed for safe-keeping and constitutional experts warned of all kinds of shit.

Denys Finch-Hatton, editor of Which Constitution?, said: “Britain is organised on the basis that the government of the day will provide a Question Time panellist regardless of Alistair Campbells.

“We’re now witnessing the most fundamental change to our national governance since the lamentable decision to give Roman Catholics the vote in 1978.”

The Question Time Act was passed 140 years ago after the Franco-Prussian War exposed Britain’s lack of a weekly public forum made up of politicians and maybe one or two people who were not politicians.

The first panel was convened on October 14th, 1873 and featured Secretary of State for the Colonies, Earl Granville, shadow home secretary Richard Cross, the novelist George Eliot, biscuit tycoon George Palmer and the controversial stand up comedian Arthur Picklethwaite. The event was chaired by David Dimbleby and seen by just 17 people because television would not be invented for another 50 years.

Margaret Gerving, a retired headmistress from Guildford, said: “If the government is not going to appear on Question Time then this country is basically Somalia and I may as well set fire to all the houses in my street. If you’ll excuse me, I have to go to the petrol station.”

But Helen Archer, from Doncaster, insisted: “Question Time perpetuates the class-based, establishment hegemony. I think we should abolish it and have a democratically elected programme that I never watch.”

And Bill McKay, from Peterborough, added: “Is that the one where members of the public take bits of furniture to whichever hotel Fiona Bruce is currently staying in?

“I was quite upset when they had that Nazi on last year. What does he know about sideboards?” 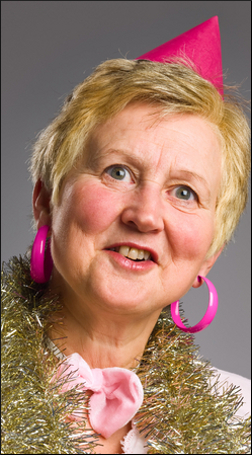 BIRTHS to women over 40 have trebled in the last 20 years as men
continue to lower their standards, according to latest figures.

New statistics suggest that if the trend continues, by 2030 nursing homes will have to start providing creche facilities and wheelchair accessible changing tables.

Dr Martin Bishop, of the Institute For Studies said: “In the 1970s there was no need to hump older ladies as Britain was awash with scantily-clad young nurses with saucy giggles.

“Uncomplicated fun was just a swanee-whistle slide away, as long as you could avoid being interrupted by Hattie Jacques.

“But nowadays men are so frightened of inadvertently waking up next to a school satchel that they’re doing the grey fandango to avoid spending five years picking broken glass out of their dinner.”

Bishop stressed that the increasing awfulness of teenage girls is also encouraging men to start a family with women who do not need ID to buy glue.

He said: “Most women under the age of 25 are a screeching combination of Southern Comfort and Living TV. All of a sudden liver spots seem infinitely preferable to a butterfly tattoo just above the arse.”

Advances in nutrition and plastic surgery have also meant that older women no longer have to wait for the combination of excessive alcohol, desperation and the nightclub closing in 10 minutes to find a father for their children.

Bishop added: “Catherine Deneuve has started to complain about gypsies and Susan Sarandon keeps forgetting her teeth but you obviously still would.”