JEREMY Corbyn has been branded a danger to British children after unveiling a demented plan to spend more money on their education.

The Tories said the Labour leader’s pledge to spend an extra £20bn on educating people proved once and for all that he is a gibbering lunatic who wants to set fire to every single school in this country while cackling like Satan.

Education secretary Justine Greening said: “Any idiot knows that the best way to educate children is to spend as little money on it as you can possibly get away with.

“We will pursue a sensible, well-established education policy of dicking about with schools until the whole system is completely fucked up.

“And then we’ll do it all over again.”

She added: “And we will do this by cutting corporation taxes for deeply patriotic multinational firms who just want to fire their army of cheap labour and replace it with robots.”

May trying to imagine what human beings are like 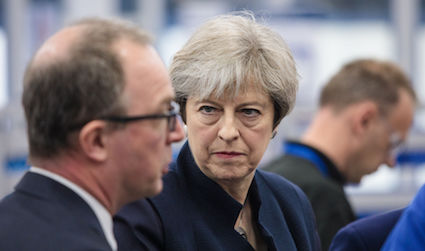 THERESA May is trying to find out what motivates normal human beings so that she can sound vaguely like one of them, it has emerged.

After promising to cap household energy bills, the prime minister is attempting to identify other ways of appealing to people who are not weird political robots like herself.

A Downing Street source said: “I think Theresa’s been googling ‘what do people like’ because she asked me if I had any policy ideas about Harry Styles, Blackadder and ‘hot MILFs’.

“She’s also asking random people. One of her security officers is into carp fishing, so she wanted to give everyone in Britain a rod and tackle box, but Amber Rudd said it wasn’t that popular.”

“After speaking to four of the humans I’m planning a number of new initiatives, starting with a £15 billion scheme to make actors speak clearly in BBC dramas.”

Voter Norman Steele said: “She’s promised to bring back hanging and commission a new series of The Vicar of Dibley. It’s like all my Christmases have come at once.”