Ed Balls to be on television every day

A POLICE protection officer has been suspended after destroying Britain’s relationship with not having to look at Ed Balls.

Detective constable Paul Rice is understood to be devastated, insisting he had no idea his affair with Alan Johnson’s wife would have such catastrophically nauseating consequences.

Rice had been assigned to Johnson when he was home secretary, but Johnson had tried to keep the protection officer when he became shadow chancellor as Rice knows far more about economics.

A source said: “If he could have had an affair with Ed Balls’ wife he would have. But he’s not really into 13 year-old boys.”

Johnson resigned yesterday allowing Labour leader Ed Miliband to fill your television screens day after day with the man tipped widely to succeed Harriet Harman as the worst person who has ever existed.

Miliband said: “I am sorry to see Alan go. He had just discovered how many fives there are in 50. But it does now mean we can have a shadow cabinet made up solely of freaks.

“Ed, his lovely ‘wife’, Liam Weird, Jim the Experiment and in Douglas Alexander it means for the first time in British history the shadow foreign secretary is an annoying pre-teen lesbian.”

Miliband believes his shadow cabinet can now out-freak a government that includes some of Britain’s creepiest teenage boys, one of whom is ginger and Scottish.

Tom Logan, professor of politics at Reading University, said: “Osborne versus Balls. Squeaking at each other. On telly. Every day.

“Paul Rice is such a fucking dick.”

Incomprehensible Scotsman buys &#163;20m worth of Soleros from Ajax 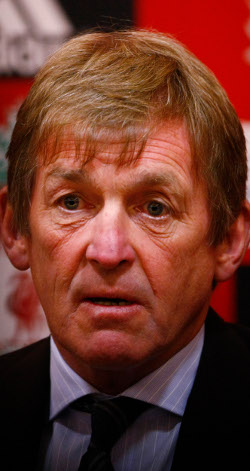 The iconic scowl has now been forced to employ interpreters to make his transfer requests understood after buying a huge quantity of non-footballing items from Europe’s leading clubs.

Ajax manager Frank De Boer said: “Mr Dalglish came into my office and told me he wants to buy ‘lots of Soleros’ and that he has more than Â£20m available. The fleet of trucks leaves next Monday.

“We even managed to negotiate a Â£5m add-on fee for some training cones and a tablecloth, although I think he may actually have been trying to order a taxi at the time.”

The trip to Ajax has brought Liverpool’s January spending up to Â£35 million after Dalglish left the San Siro in Milan with eight tons of topsoil and then orderded 40,000 pies from Aston Villa.

But he has recouped Â£7m after accidentally selling Ryan Babel to Hoffenheim during a takeaway pizza order.

Dalglish has yet to win a game during his new stint at Liverpool as he continues to struggle with basic sentences and many of the foreign players are under the impression the manager is still Roy Hodgson after having had some botox and a stroke.

Assistant Sammy Lee said: “Sometimes I look into his eyes and I can almost sense what he’s trying to tell me.

“Hopefully, unlike his two predecessors, it’s not that there’s a draught coming from somewhere or that he’s being targeted by Mossad because of his shoes.”