Everyone agrees to quietly forget Brexit thing ever happened

EVERYONE has agreed to quietly sweep the referendum result under the carpet, it has been confirmed.

Britain has confirmed plans to keep its head down and start talking about television programmes whenever anyone mentions Article 50.

A government spokesman said: “The ‘Leave’ thing has become like a workmate’s barbecue where many people agree enthusiastically to attend, then bail on the day after realising they’d rather go to Homebase.

“Let’s just ignore it and move on – Boris is cool with that, he never gave a shit really and Farage was only doing it to get himself a TV agent and crack the jungle reality show circuit.”

Leave voter Norman Steele said: “I just wanted to get shot of foreigners, now the pound’s gone tits up and our village is awash with Japanese tourists pointing technology at my wife. I’m not saying I made a mistake, but if nobody else mentions it then I won’t either.”

Mother-of-two Emma Bradford said: “I remember a time at school when someone smashed a window in the science lab, all the teachers went mental and we had a special assembly where the police came in.

“It seemed like a huge thing but two days later it was all forgotten about. That’s what Brexit’s like.”

Man will approve haircut unless an ear has been cut off 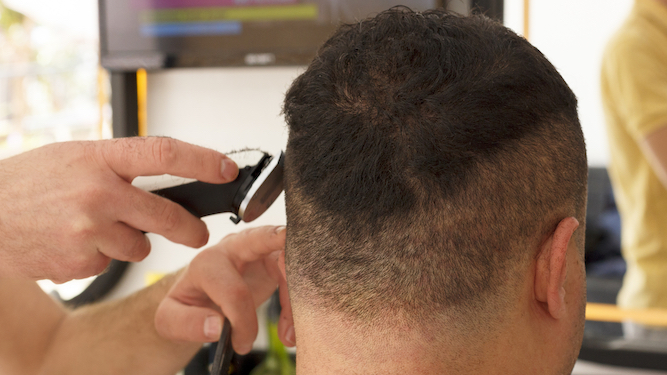 A MAN receiving a haircut has confirmed he will nod appreciatively when the barber asks unless he has lost his entire ear.

Tom Logan is ready to feign delight at whatever haircut he receives, no matter how far from his original brief, unless it crosses the line of permanent disfigurement.

He added: “My main priority is to get out of this chair as quickly as possible. I’ll see what the haircut’s like when I get home.

“I don’t know what the back of my head looks like and I don’t care. Unless he’s shaved ‘TWAT’ into it, and even then I’d just suggest it needed ‘tidying up.’

“If he’s gone Reservoir Dogs and taken off the ear I wouldn’t be happy, but if he gave it me in a jar and knocked a few quid off I’d probably leave without complaint.”

Barber Wayne Hayes said: “I must be brilliant at cutting hair.’”