BRITONS are worried that Labour leadership candidate Owen Smith might try to sell them life insurance or solar panels, they have revealed.

Many have noted Smith’s resemblance to the sort of salesperson who talks you into buying unnecessary insurance cover or a top-of-the range vacuum cleaner when a £35 one would do.

Teacher Donna Sheridan said: “I’ve got this nagging fear there’ll be a knock on the door and it’ll be Owen asking if he can come in to discuss solar panels.

“Or maybe I’ll go to Currys for a telly and he’ll be there and persuade me it’s ‘worth spending a bit extra’ and I’ll end up with a 75” HD smart TV when I only wanted it to occasionally watch the snooker.

“Maybe it’s because he keeps saying things people want to hear, and the last time someone did that I ended up joining some stupid book club to make my children clever.”

Pensioner Roy Hobbs said: “For all I know he’s as committed to socialist principles as Nye Bevan, but if he comes round here trying to sell me timeshare in Portugal I’m letting the dog out.”

Smith said: “My priority is to make Labour electable again, but since we’re chatting can I ask if you’d be interested in making easy monthly payments towards a deluxe Christmas hamper?” 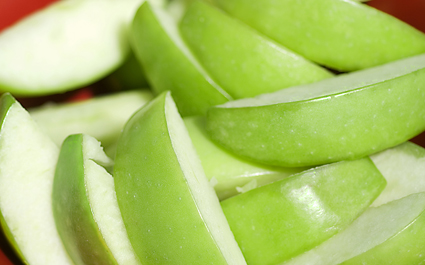 THE gap between those who buy expensive packs of pre-sliced fruit and normal people is wider than previously thought, experts have found.

Researchers at the Institute for Studies found that purchasers of apples that are sliced up and then sold in a clear plastic pot lack basic human characteristics.

Professor Henry Brubaker said: “Our research shows that someone who buys bags of sliced mango from M&S has more in common with the mango they’re consuming than they do with a human being who uses a knife to prepare their own fruit.

“Most fruit is usually well packaged within its own skin or peel. Pre-sliced fruit buyers have some sort of problem with nature.

“Basically they want to destroy everything.”

Pricey packet fruit buyer Martin Bishop said: “I’ve worked hard all my life so that I don’t have to de-seed my own melons.

“Am I supposed to apologise for that? We live in a meritocracy. If people worked harder, everyone would be able to peel the top off a tub of chopped mango fragments with a sigh of self-satisfaction.”