Corporal Johnny Atkins was making a brew when a panicked sentry rushed up to him. ‘Frenchmen,’ he gasped. ‘Ruddy millions of the blighters, heading our way in heavily armed small fishing vessels!’

Looking out to sea, committed Brexiter Atkins saw the grim armada approaching. ‘I’ve got to stop them,’ he thought. ‘We don’t want Frenchies strutting around in their jackboots in the home of our beloved 1980s TV detective Jim Bergerac.’

Atkins grabbed his trusty Sten gun and rushed to the harbour, where he commandeered a pleasure cruiser. Ordering the skipper to head straight for the French fleet he said a quiet prayer to himself: ‘For the Queen. For Brexit. For an end to freedom of movement.’

Closing on the first vessel, Atkins heard a French kommandant cackling with glee. ‘Soon le Jersey will be ours! We weel rename it Macron Island! Fish et chips will be banned and toutes les English will have to eat confusing langoustines instead. Ha ha ha! Ah ha ha ha!’

Incensed, Atkins finished him off with one burst. Then, darting between the French fishing warships, he sent all of them to a watery grave. This isn’t terribly realistic, even for a Commando comic, but this is a story for Brexiters.

Back in St Helier, Atkins breathed a sigh of relief. ‘Time for some grub,’ he said. ‘Just so long as it’s not bloomin’ French fries!’

Order the next Brexit Commando comic, Blitz on Brussels, for just 35p, like in the old days. 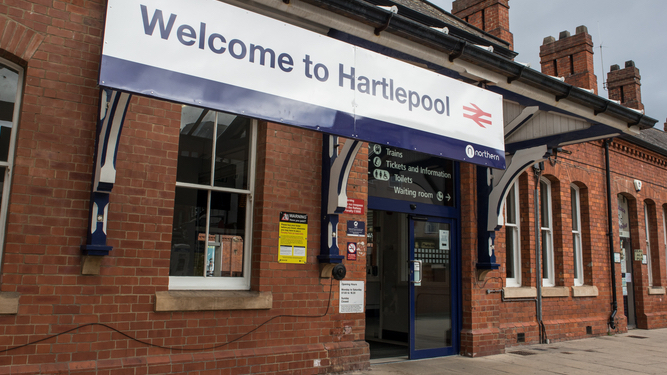 RED Wall Tories have made their voices heard in Labour’s former heartlands. Take our quiz and find out if you’re one of these confusing voters.

What do you think of Boris Johnson?

A) He’s a straightforward, honest bloke who does what he says. He’s one of us and he’d fit right in at the working men’s club. Yeah, I don’t know where I get this shite from either.

B) ‘Liar’ and ‘scumbag’ are the first words that come to mind, but I can think of more.

What do you think of Keir Starmer?

A) A stuck-up, Surrey softie from the loser Labour Party. He’s nearly as bad as that ‘Sadiq Can’t’ bloke from London. Yes, I do read a tabloid newspaper. Why do you ask?

B) He seems like a decent guy, but as leader of the official opposition he needs to put some practise in at this ‘politics’ business.

Do you believe the government is serious about its ‘levelling-up’ plan?

A) It’s going to happen, without a doubt. The North will be driving the country just like during the industrial revolution. With the same working conditions.

B) I’d imagine that bullshit has been forgotten about as quickly as that mental underwater railway idea.

Who was to blame for the decline of British coal mining and the way it was handled in the 1980s?

A) I know I said it was Margaret Thatcher’s fault at the time, but we were in the EU so it’s their fault. Michel Barnier practically got on a horse and bashed those miners’ heads in himself.

B) Probably the people who were to blame for it.

It is 2024 and whole industries are collapsing, causing unemployment and poverty. How are you going to vote?

A) Let’s give the Tories another go. It’s just Brexit teething problems and the Conservatives have got a new, very persuasive three-word slogan: ‘Vote Tory, peasants’

B) Anyone who isn’t the Tories. Count Binface would be worth a go, even if he’s not as hilarious as he thinks he is.

Mostly As: You’re either in a deeply confused place or a genuine Red Wall Tory idiot.

Mostly Bs: You still have some critical faculties left. Get down to the newsagent’s and buy a copy of the Sun NOW.