MICHAEL Gove left his fully-grown wife alone in a hotel room while he went out partying with their 11-year-old son, it has been confirmed.

Gove told his wife that and he and their son would be back when they were back, and not to wait up.

A source  said: “Michael and his son went out in the afternoon and had a whale of a time. They had ice creams and fizzy pop and they even managed to walk around the Natural History museum after every one else had gone.”

“They got photos of themselves with the dinosaurs and everything.”

Gove and son returned to their hotel room at 11.30pm after a roller disco, all pooped out from their adventures and ready for bed.

Gove’s wife Sarah Vine said: “As much as I’m annoyed that they didn’t tell me where they were going, I was happy to have them out of my hair for a few hours. Last time this happened Michael was sick from eating too many sweets.”

Michael Gove then slept soundly, right through the night, only waking once after a nightmare about a tyrannosaurus rex with Boris Johnson’s head chasing him through the Houses of Parliament.

Thanks for making us experts on tedious financial shit, UK tells Brexiters 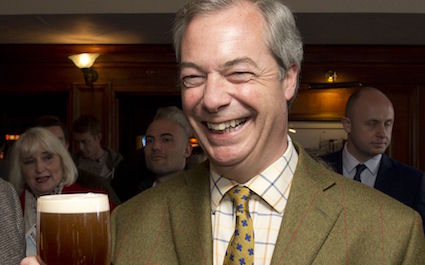 BRITONS have thanked Leave voters for forcing them to learn about piss-boring things like exchange rates and EU law.

Brexit coverage has made millions of people highly knowledgeable about issues that are mind-meltingly tedious.

Graphic designer Nikki Hollis said: “Everything about money and finance bores me rigid but now I’m an expert on interest rates and inflation, so thanks a fucking lot for that, Brexiters.

“You can imagine how much I’ve enjoyed making myself informed about trade tariffs and the effects of a weak currency on global supply chains.

“Frankly I’d like to round-up every Brexiter and make them count to a trillion out loud at gunpoint.”

Teacher Stephen Malley said: “I’d like to thank Leave voters for sending me on the fascinating journey of discovery which is learning about World Trade Organisation export rules.

“If my current career doesn’t work out, it’s nice to know I could probably get a job explaining international trade regulations and become a depressed alcoholic.

“What really turns me on is how government bonds are sold to raise funds for quantitative easing. Just mentioning that makes me want to crack one off right now.”