THE prime minister has announced plans to cause thousands of avoidable deaths in a scheme he calls ‘saving Christmas’.

Boris Johnson has confirmed that while lifting restrictions on mixing households in the middle of the second wave will cost thousands of lives and cause millions in damage to the economy, the headlines hailing him as the saviour of the festive season will be worth it.

He continued: “Isn’t it the most wonderful time of the year? Carols, mistletoe, presents, the To The Manor Born Christmas special?

“Yes, the boffins think we should stay locked down. No doubt the boffins would have told Churchill not to personally bayonet Nazis on Folkestone beach on Boxing Day in 1940 like he did in my biography.

“But I know, with my unerring feel for the mood of the country, that you’re all so desperate for a big family Christmas that you won’t mind the extra month of lockdown and 10,000 or so excess deaths one bit.

“So break out the tinsel, get everyone together, and let us worry about the consequences which will entirely fall on you guys. I’m saving Christmas. That’s what matters.”

Lucy Parry of Gloucester said: “This is fantastic news, and there’s no danger of this government prioritising good publicity in the short-term over the long-term good of the nation. Just look at their track record.”

Sharing an umbrella, and other romantic things that are actually shite 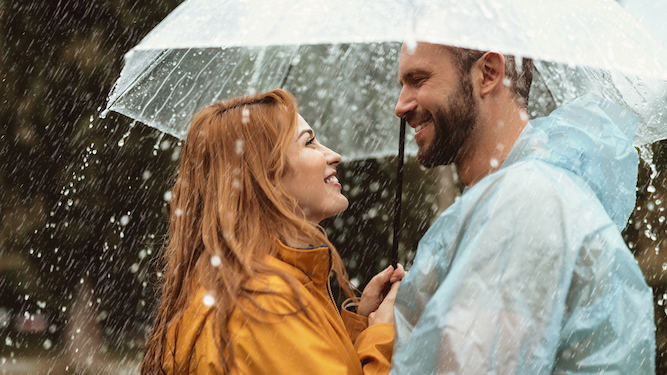 IN THE first flushes of love? These romantic favourites will be suffered through with gritted teeth by both parties:

Umbrellas are a one-person thing. It’s annoying enough sharing one if you’re both the same height, let alone when one of you is five foot two and the other’s six foot one. Prepare for one of you to be soaked and resentful.

Cooking for your partner

Can’t eat out? No problem. The new light of your life will make a three-course romantic meal for you. Which in practice means you sit there alone while they bugger about swearing in the kitchen, then you lie about their disappointingly chewy risotto. Just get a takeaway.

Even scented candles and rose petals can’t disguise the fact that you’re sitting in one another’s filth. Lying in tepid water next to a toilet, unable to move without kneeing your partner in the boob, gets old fast but you’re obligated to stay in for a minimum 30 minutes.

Walking arm-in-arm through the park

Going for a walk in the park together is the lifeblood of romance, until you remember that modern parks are filled with dog shit, surly teenagers smoking weed and creeps jodding off in bushes. The mood of romance will be difficult to sustain.

When Covid restrictions allow it, you can go to a hotel for sex. Except that your room’s not big enough and has a view of a wall, you’ll spend half the time hunting down a Boots to get the toiletry items you forgot, and when night rolls around the sound of desperate couples with kids having their annual bang will be an inescapable reminder of where romance leads.