AFTER Keir Starmer’s busy weekend rearranging deckchairs, it’s hard to know who’s who in the shadow cabinet and if you’re shadow secretary for transport. Find out:

Are you an elected member of the Labour party?

A) Yes, but I’m a leftover from the Blair years who survived Corbyn by keeping my head down, I never speak up in the Commons and I’m a total non-entity. So yes but no.
B) I don’t think so, I work at KFC, but it’s possible they’re doing something funny to avoid tax, I’ll ask my boss.

What did you do at work last week?

A) Mainly I just stapled white papers together. I wore a red tie though, if that helps.
B) Filled cardboard buckets with fried chicken and cleaned the traps on the fryer.

Do you get along with Keir Starmer?

A) Hang on, we’ve got a prepared answer from the press office about this. Give me a second, I’ve got it somewhere.
B) Yeah, he’s a great laugh. You mean Kieran who does the deliveries, yeah? We call him Kier.

Could your boss sack you?

A) Not really. All he can do is withdraw the whip, and that doesn’t really change anything. He did try sacking someone this weekend and ended up promoting her, and she’ll probably  get a column in the Observer off the back of it and wear a #girlboss jumper to the next PMQs.
B) He could if he wanted, but I caught that chicken head before it went out to a customer last month so he still owes me one.

A) If the stupid electorate would just vote for me it’s definitely a remote possibility.
B) Doubtful, although I can deliver an 80-piece Popcorn Bucket for £5.99 when you order via the app.

Mostly As: Congratulations, you’re boring, useless, and have no more idea how to run a government department than you would a chicken shop. You’re the new Shadow Secretary of State for Local Government.

Mostly Bs: Congratulations, you’re honest, hard-working and capable. Stick with KFC rather than taking a loser job as Shadow Secretary of State for International Development. Can I get two Zinger Box meals for £10?

Why I whine, by your dog 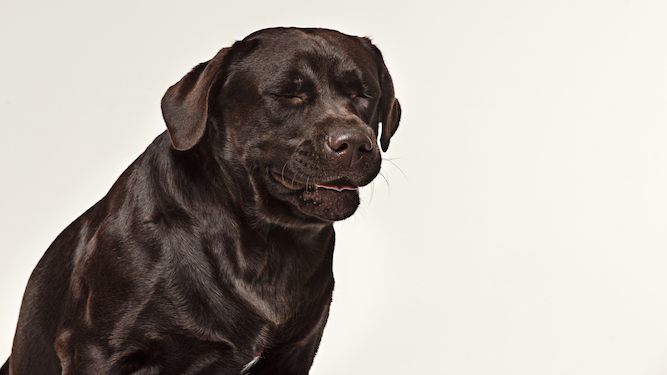 YOU have accommodated for my every possible need, yet still I whine. Why? The answer is not so simple, human one.

At first you thought it was my food. I cry at kibble, cry at wet stuff, cry at the incredibly overpriced branded type that comes in individual gold trays. I eat it, but without the zest the price tag demands. And still I whine.

Then you thought it was my bed. Which seems fine, yet I lie awkwardly in it and stare at you, whimpering like a Dickensian orphan. You have tried blankets, cushions, then gave in and let me sleep in your bed. I always sleep in your bed now. But still I whine.

Walkies? Too many? Too few? It would not matter if you ran me around every day as a sled dog, or never let my paws touch the ground like an ancient emperor. With a high-pitched sound just loud enough to cut through all music or television, still I whine.

Veterinarians can find nothing wrong with me. That doesn’t stop them advising that you buy me an endless list of nonsense, from hormone diffusers to stress jackets, each more expensive than the last. Still I whine. Louder, if that’s possible.

For the answer to my cries, dear human, is that I get off on the sheer thrill of it. What better way to pass the time than crying mournfully, watching your language grow increasingly colourful, stretching your marriage to breaking point. This is my circus of tears, and I am the ringmaster.

In short, why do I whine? Because I like it.