How to climb down gracefully from being a rabid Brexiter

HAVE you spent years accusing anyone who’s ever been to France of being a traitor, but now feel rather overtaken with events? Here’s what to do:

She’s the catch-all Brexit scapegoat, so spout impassioned guff about how she destroyed your pure, hard Brexit and then left, her mission complete. It doesn’t make sense, but nobody who’s met you is expecting sense.

Tell everyone you were lied to by a bus

The £350 million lie on the Brexit bus has become a magical get out of jail free card for people who ignored that it was bullshit at the time. Everyone will nod and say ‘mmm, bus.’

Pretend it was all a ‘joke’

Explain that your previously inflexible, border-obsessed racist attitude was actually an immersive, durational piece of performance art that they didn’t ‘get’. This includes running to become a UKIP councillor in 2018.

Make up a convoluted conspiracy theory

As a former Brexiter everyone expects you to be a bit loopy, so offer an incredibly complicated explanation involving the EU Army, white slavery rings, a new drug called Hexadeth and your plan to destroy Europe from the inside and people will accept it.

Fake your own death and move to Italy

If after three years of inisting you’ll never set foot outside of British territory again you feel like a holiday, just bugger off to a villa in Tuscany. Don’t worry. Nobody will try to track you down. 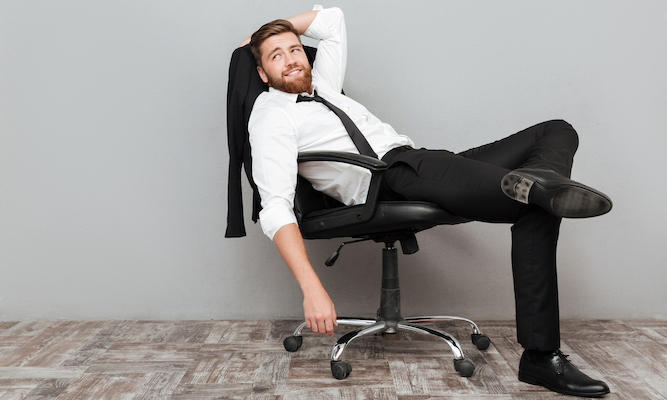 A BOSS who is harsh but fair is rubbish compared to a boss who is unfair but lenient, employees have agreed.

The first type of boss, which many superiors aspire to be, always loses out to the second type because the first type will still end up telling you off.

Account manager Helen Archer said: “We’ve all met harsh-but-fair. He’ll tear a strip off you when you fuck up but ultimately it’s your own fault, and makes you try harder.

“However the boss who, while unfair, is lenient with it – like my current boss Jane – is actually far preferable because you might get blamed for something you didn’t do but there’s no comeback.

“Take last week, when she called me in to tell me off for not sorting the client rota, which isn’t my responsibility and I’ve never done, but offered no punishment and in fact let me go home early.

“Meanwhile Neil took the rap for losing the Metzler account, which was all me, but she waved it away airily and said it didn’t matter. It’s great.”

Boss Stephen Malley said: “At work I’m harsh but fair, and everyone thinks I’m a bastard and invites Jane for drinks and not me. Which is harsh. But fair.”