I Hate Every Last One Of You, Admits Brown

As Labour faced its worst election result in more than 4000 years, Mr Brown confirmed the long-held suspicion that he’s never liked us either.

He said: “It has long been claimed that I am a miserable sociopath who has only ever cared about becoming prime minister.

“Well, guess what? It’s true. Whoop di-fucking-do. Well done Simon Heffer and Quentin Letts, you were right all along. You fat pricks.”

He added: “I tell you what, why don’t we let David Miliband run the country? Or shall we wait until his nuts have dropped?

“What’s that David? Why do all the other men in your office start work that little bit later than you? Well, what happens is, when you’re having your Coco Pops, they have to shave.

“Or what about Ed Balls, you say? Okay, but you’ll have to wait until he’s finished licking mine.”

Mr Brown admitted his body language had often hinted at the depth of his loathing for other human beings, adding: “It’s not just that I don’t like you, it’s that I want to see you torn limb from limb by crazed laboratory chimps.”

The prime minister then left the podium briefly, returning with a wooden pallet, stacked high with phone books.

He then sat down, opened the Aberdeen directory, went straight to the ‘A’ section and began running his finger down the entries, saying ‘hate you’ after each one.

Office Workers Told To Stop Shitting On Each Other&#8217;s Keyboards 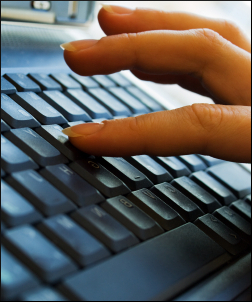 WORKERS in offices have been ordered to stop defecating on each other’s computer keyboards.

Tests by the consumer group Which? revealed that 90% of workplace keyboards now contain human faeces belonging to someone other than the keyboard user.

Which? said the main cause of contamination was workers being gripped by uncontrollable stomach cramps after eating a ghastly prawn sandwich at their desk.

Abby Quinn, a Which? researcher, said: "In an emergency the choice is limited to your waste paper basket, your filing cabinet, or your neighbour's keyboard. It's what they call a 'no brainer'."

Call-centre worker Danny Tilford said he emailed his boss to complain after one particularly bad defecation left his keyboard clogged with undigested sweetcorn.

"And who got the sack? Not Mr Shitter."