It was me that called them swivel-eyed loons, says Cameron

DAVID Cameron has admitted that he is the senior Tory who called activists ‘swivel-eyed loons’.

Confirming that he ‘hates every last fucking one of them’, the prime minister said he now wished he had chosen a different career.

Speaking to ITV’s This Morning, he said: “I actually called them ‘swivel-eyed motherfuckers with brains full of goat piss’.

“The Telegraph changed it to ‘loons’ because Telegraph readers are the sort of people who get terribly offended at the word ‘motherfuckers’.”

Grabbing Holly Willoughby by the wrist, he said: “You want to try sounding sympathetic while they spout their endless, shit-filled opinions about Europe and gay marriage.

“Don’t get me wrong, I’m not some fanny-arsed liberal, but fuck me if these people haven’t escaped from somewhere.

“If I thought I could get away with it I’d push them off a fucking cliff.”

Looking into the camera, the prime minister continued: “Go and join UKIP then, you bunch of mouth-breathing dipshits. Try and out crazy each other until you fall to the ground, writhing and speaking in tongues like some mental, Southern Baptist weirdo.”

Cameron said he was now thinking about returning to his previous career of doing PR for a television company, insisting that ‘some of the programmes might be quite good’.

He added: “I really just wanted to be Tony Blair. Does that make me a bad person?”

Gay people to continue having lots of hot sex 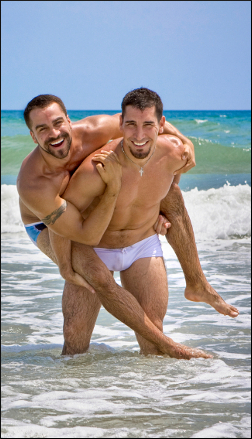 BRITAIN’S gay men and women have defied angry Tories by taking their gayness to a new and hotter level.

As Tory backbenchers threatened to wreck the gay marriage bill, gay people said they would redouble their commitment to giving each other world class orgasms.

Roy Hobbs, from Hatfield, said: “I want to assure those Tory MPs who think the status of my relationship is somehow their business that I can barely walk this morning.

“We were at it for hours last night and are now both severely drained of fluids.

“And we’re not even married. It feels so wrong.”

Martin Bishop, from Stevenage, said: “Perhaps they thought that by opposing gay marriage they could ‘stem the tide’. Well, they’re not stemming my tide. It was all over the shop last night.

“Turns out I’m even gayer than I thought. Jesus Christ.”

Helen Archer, from Doncaster, added: “My girlfriend and I have been left with no choice but to play with each other’s vaginas in a way that would make Philip Hammond wish he had one.

“We had hoped to use our time undermining traditional marriage, but instead we will be forced to concentrate on coming like a pair of blissful nutters.”

Tim Loughton, one of the Tory backbenchers who wants to win by cheating, said: “Please stop being like this.”