PRIME minister David Cameron has been receiving advice from Prince Philip on how to talk about foreigners, it was confirmed last night.

Downing Street revealed the one-on-one sessions after Mr Cameron was overheard referring to Iran as being ‘like Mordor full of mosques and kebab shops’.

The comments came just a week after he described Pakistan as a ‘nation of exploding shopkeepers’ and was photographed pulling at the corners of his eyes during a formal lunch with the prime minster of Japan.

A Downing Street spokesman said: “Shortly after taking office, the prime minister was briefed by the Duke of Edinburgh on the four basic, untrustworthy foreign types.

“The prime minister was given a bullet-point rundown on the key characteristics of each one, including thievery, violence, general laziness and surly ingratitude.”

The spokesman added: “His Royal Highness spent an awful lot of time talking about the slitty eyed devils, but he is nothing if not a 21st Century thinker.”

Tom Logan, professor of geo-politics at Reading University, said: “Prince Philip is often portrayed as being a hopelessly irrelevant old bugger, but in the recent public consultation on government cost cutting, more than 60 per cent suggested feeding immigrants to the big cats at Longleat Safari Park.

“Which indicates that the Prince does seem to have a deeper connection with the British psyche than the likes of Harriet Harman. I’m not sure how I feel about that.”

Meanwhile Mr Cameron will hold formal talks with President Zardari of Pakistan later today while dressed like one of the bomb disposal experts from The Hurt Locker. 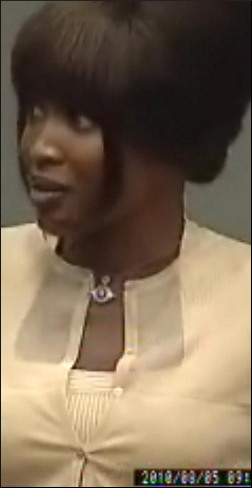 NAOMI Campbell has revealed how her appearance at some silly war crimes trial had forced her to delay a vital eyelash conditioning appointment.

Appearing at the trial of blood-soaked Liberian warlord and friend to the stars Charles Taylor, Ms Campbell admitted she was a reluctant witness and asked who she should sue if her eyelash re-ioniser was forced to do a rushed job.

She said: “They’ve gone all skrunky and if I don’t get some new ions into them right now, then I may as well ask Jean Pierre to cut my head off.”

The 40 year-old supermodel then charged suddenly across the courtroom and began beating the stenographer with a sock full of coins, while shouting ‘why are you writing that down, you fucking bitch?’.

Back in the witness box, Ms Campbell confirmed she had attended a gala dinner in 1997 with Taylor, Nelson Mandela, Mia Farrow and Fern Britton in support of something to do with schools. Or possibly pools. Or possibly scales.

She added: “Shortly after I had returned to my hotel room, there was a knock at the door and a man handed me a pouch containing some dirty little stones. I removed them, threw them as hard as I could at my maid and went to bed.

“The next morning, as I was picking them out of her forehead, I noticed they were still dirty. So I kicked her in the stomach and told her to clean them up, chop-chop.

“It was only then that I realised they were diamonds. I’m really sorry if some people got hurt when they were picking them from the diamond trees.

“They should give them better quality ladders.”