Johnson or Corbyn – which would you rather have as your neighbour in a 70s sitcom?

You’re having a party and invite the neighbours round. How do they behave?

Boris Johnson gropes the bottom of a lady vicar, asks an Asian friend why she isn’t dressed up as ‘a bank-robbing letter box’ and falls in the fishpond.

Corbyn lectures a lady vicar about the evils of organised religion, tells a Jewish friend it isn’t anti-Semitic to lay a wreath for the Black September killers, and accidentally puts his foot through the television.

The neighbours’ tree is overhanging your property and endangering your garage. You ask if they could trim it back a bit. How do they react?

Corbyn stares at you, says nothing and goes in. Later on approximately 46 leaflets about the environment, protecting habitats, and climate change are silently pushed through your door.

Johnson tells you he’s already done it and points at the overhanging branches, telling you they are no longer overhanging.

You invite your neighbour around for a barbecue. What do they bring?

Johnson brings six friends from Oxford who eat everything, drink all the booze, throw chairs through your patio doors then write you a cheque for it on their way out.

What happens when you ask to borrow a cup of sugar?

Corbyn tells you the sugar must remain under his control but you can have a spoon at a time, providing you can prove a genuine need for it.

Johnson says it’s the people’s will that he keep all the sugar, and he doesn’t like to use inflammatory language but if you ask again he’ll see you bloody hanged.

Fruit not a snack, say kids 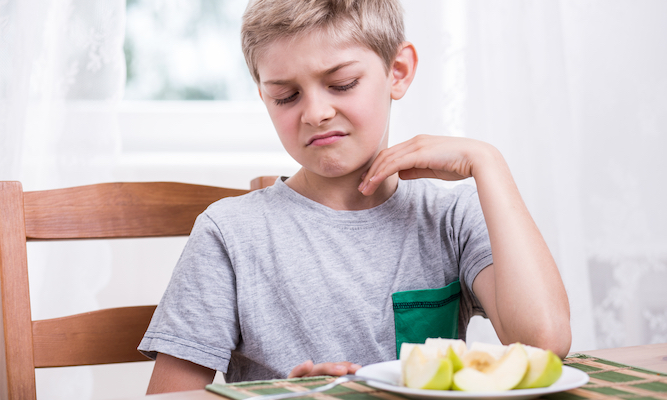 CHILDREN tired of being told to have an apple whenever they are hungry are calling for fruit to no longer be classified as a snack.

Kids aged between three and 16 have confirmed that when they request a snack they are requesting the kind of snacks adults have, for example a Kit Kat Chunky or packet of pickled onion crisps.

Eight-year-old Joe Turner said: “I don’t see the grown-ups reaching for a kiwi fruit when their blood sugar’s low. They’re straight on the chocolate Hob-Nobs.

“An apple isn’t a snack. It’s just a crunchy green ball of sadness.  I do not want to munch on sadness after a long day of phonics.

“And don’t get me started on bananas. That’s like unwrapping a pair of novelty underpants from your gran on Christmas day. Unacceptable.

“If we have to have our ‘Five A Day’, and again I notice the adults aren’t, it’s only fair that Fruit Pastilles, big glasses of blackcurrant and those giant strawberrys from sweetshops are included.

“Or, alternatively, stop buggering about and give us biscuits.”